Windows 8 will apparently sport a "Metro UI" look and feel. The installation process is also streamlined and broken down into stages. Each stage provides the user with an explanation of whats going on and how far until the operating system is finished installing.

Windows Explorer Ribbon will also make its debut in Windows 8. Microsoft seems to be merging many of the features of its various products in order to create a streamlined and consistent user interface. This should allow for greater ease of use and familiarity within Microsoft's diverse line of products.

Windows 8 will showcase progress indicators whenever you install new hardware. This can come in handy when you are trying to install a new hardware while working on something else. Windows 8 will also have Live ID integration on the taskbar.

Another neat feature of Windows 8 is the Modern Reader application. Modern Reader will provide users with a very simplistic interface to quickly view PDF files. It is also one of the first apps to utilize the AppX application model (Codename Jupiter).

With Windows 8, Microsoft intends to provide a dual interface design to cater to the growing use of touch-based devices such as tablets. Although we have yet to see actual screenshots of the Immersive UI, we are being provided a glimpse of Microsoft's approach with a new Immersive version of Internet Explorer.

Windows 8 will sport a secondary tile-based UI that will support tablet devices. This will allow for proper and smoother interaction. Along with the alternate UI, there are also reports of an "App Store" that will be a part of Windows 8. Apparently, the logon screen for this new alternate tile-based UI has been leaked. The login screen is Metro-inspired and showcases the date, day of the week, and a power management icon.

For those interested, here is the Windows 8 roadmap slide that showcases the development timeline: 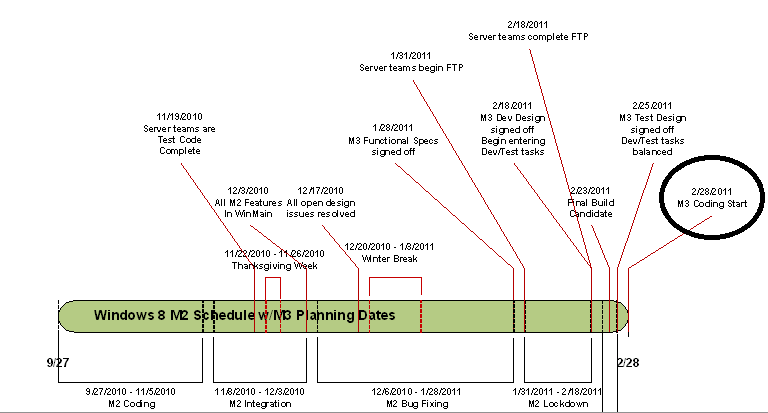 Microsoft's next big thing in the operating system standpoint is scheduled to hit RTM (Release to Manufacturing) at the very end of the year 2012. Stay tuned as we keep you updated on any late breaking Windows 8 news.