Here are all the details about Microsoft's new Surface Pro

Microsoft just took the wraps off its new and updated Surface Pro device, aptly named the Surface Pro. With the new name change comes some new additions and tweaks, to the tune of almost 800 new customized components according to Surface design head, Panos Panay.

Today in Shanghai, China, Panos and a team of executives walked through the new refinements of the Surface Pro and while the outward design is almost identical to previous iterations, the underhood tweaks are substantial, including more battery, a better hinge mechanism, softer edges and better pen technology applied to the screen.

Here are the new additions and refinements that make up the new Surface Pro.

"You can leave your charger at home because Surface Pro is packed with up to 13.5 hours of battery life.*** That’s 50% more than Surface Pro 4 and 35% more battery life than an iPad Pro. From home to work and back again, Surface Pro is there for you. This is a powerhouse laptop with 2.5 times more computing performance than the Surface Pro 3 and 1.7 times the compute of iPad Pro. The improved Surface Pro hinge has a full 165-degree range of motion, letting you immerse yourself in “Studio Mode”, an angle inspired by the Surface Studio, perfect for writing, sketching, and drawing on the go."

"The new Surface Pro is our lightest Surface Pro ever, starting at just 1.7lbs and 8.5mm thin. It’s lighter than the bag that you carry it in." 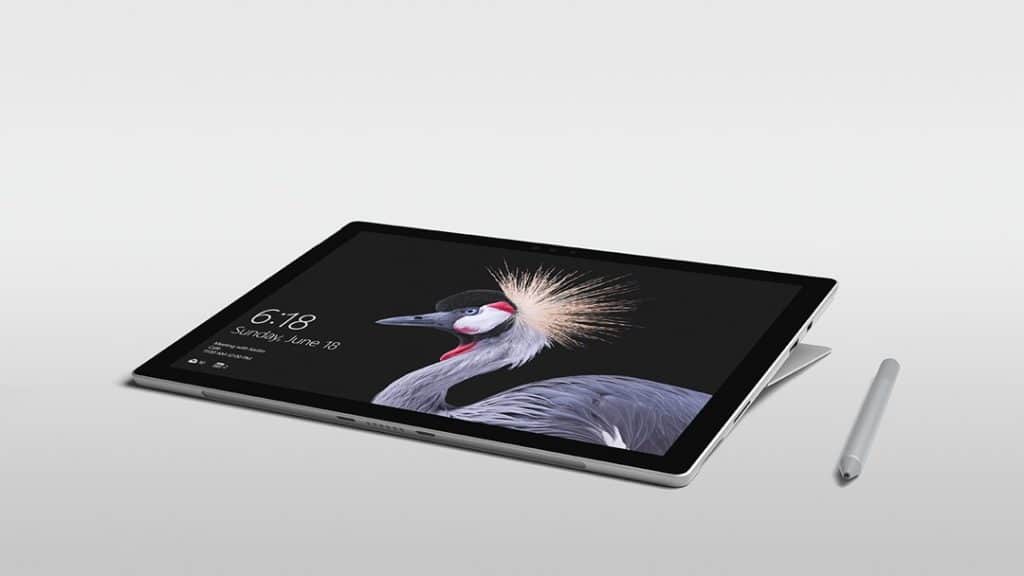 "The advancements in battery life, performance, pen and ink aren’t the end. We wanted to ensure Surface Pro was a transformative device – so we also have added LTE Advanced, available in units shipping later this year. This combination of performance, battery, sleek design, and LTE has never been done before in this light and thin of a package. Now people can work, study, and collaborate online, from anywhere."

"The new Surface Pen is only as good as the software behind it, which is why we’ve worked with Office to create new inking features that take full advantage of the hardware technology within Surface Pro and Surface Pen. These include customizable pen tips that roam with you across all your Office 365 apps, regardless of device and amazing support for tilt and shading across all Office 365 apps."

"With a powerful 7th generation Intel Core processor it can handle almost anything you throw at it, but even with all that power, you can be as inconspicuous as you want with Surface Pro, it’s the quietest Surface yet, with no fan on the Core™ m3 and the i5 devices. In fact, this is the first i5 ever with fan-less architecture. And at an unprecedented 18dB, even the core i7 can’t be heard. So, if you’re working at home, you don’t have to worry about your family getting disturbed by the noise of a fan while they’re trying to watch a movie."

While that's a lot to unpack, there were other announcements that went under the radar but ultimately make the Surface Pro redesign a worthwhile endeavor such as Microsoft's Whiteboard software now offers "simultaneous collaboration and live multi-device inking" spanning all Surface devices.

Again, while the overall look of the Surface Pro remains the same, today's newly announced device is miles ahead of its predecessors. The Surface Pro is available for pre-order in 25 select markets around the world today, and will begin shipping on June 15th.