Would a pen have saved Microsoft's Lumia 950? Early concept video surfaces - OnMSFT.com Skip to content
We're hedging our bets! You can now follow OnMSFT.com on Mastadon or Tumblr!

A couple of months later in October, Windows Phone fans finally discovered what the company had in the pipeline for them, and it's safe to say that Lumia 950 and 950XL weren't exactly the flagship phones many expected to see.

If both phones had premium specs, excellent cameras and an intriguing Continuum feature, their design was pretty bland and the software was not exactly ready for the public. Compared to previous Nokia flagships such as the Lumia 920, 930 or 1520, it was a bit hard to figure out where the design expertise and craftmanship from Nokia was gone. Moreover, it was hard not to be disappointed by the fifth generation Lumias when you knew that Microsoft cancelled the much more impressive "Nokia McLaren" a year before.

But as it turns out, Microsoft initially had a much more ambitious vision for its first flagship Windows 10 Mobile phones. Today, the folks over at Windows Central published an early internal marketing video for the Lumia 950 and 950XL that showcases never seen before features such as pen support. If you remember the old Lumia promotional videos from Nokia, you'll see that this video as a real Nokia vibe:

According to the report, the video was produced in early 2015 when the design of both Windows 10 Mobile and the flagship Lumias weren't completely finished. The pen is the main highlight of the clip, and it looks quite similar to Microsoft's Surface pen. At the beginning of the video, you see the pen being used on the Lumia 950 in OneNote, and the drawing instantly syncs to another instance of OneNote running on a Windows 10 tablet. 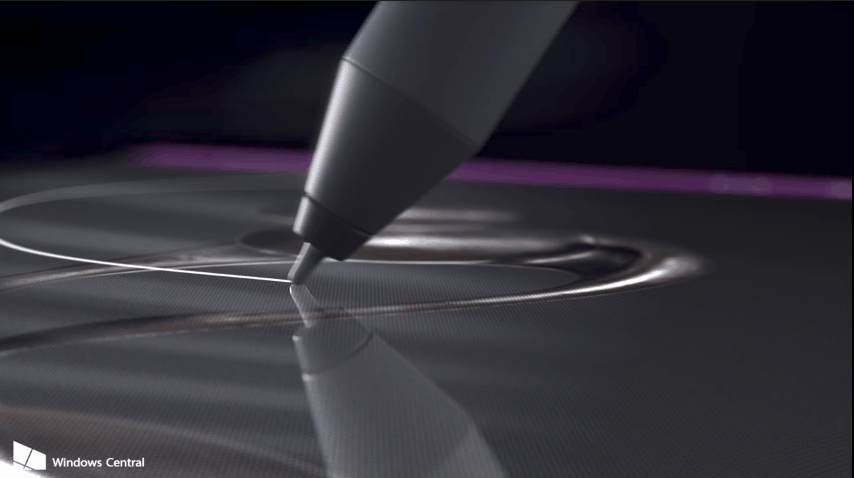 The report also reveals that Microsoft was working on an "Active Sides" edge gestures which have allowed the flagship Lumias to intuitively keep their display on and more when held in the hand. "Sources tell us that several of these features (such as pen support) were working on Lumia 950 prototypes, before the feature was canned shortly before the launch of the product in October 2015," explained Windows Central.

Last but not least, Microsoft was reportedly working on Smart Covers for both Lumia phones, which would have been compatible with Glance Screen. You can see how they looked like in the leaked internal picture below.

Nearly two years after the initial launch of the Lumia 950 and 950XL, it's a bit disappointing to learn that the flagship phones could have had a couple more features to help them stand out in this highly competitive market. However, we certainly saw over the past three years that Satya Nadella is a man who knows how to use the power of "no," which is actually a great quality for a CEO.

The Lumia 950 and 950XL were heavily criticized for being "not ready" when they started shipping in Fall 2015, and Microsoft probably made a good decision to scrap the pen and the other additional features. Releasing a product in beta state is the worst thing a tech company can do, and Microsoft was already under heavy pressure from Windows Phone fans to release new hardware and its new mobile OS back in the day.

More importantly, it's not clear if pen support and Smart Covers would have really made a difference with consumers, as Continuum certainly didn't. Pen support is truly interesting on its own, and we expect it to be one of the highlights of the mythical Surface Phone, but it's pretty much useless without a good ecosystem of apps that support it. Sound off in the comments if you think pen support could have helped the Lumia 950 and 950XL to become the true flagship phones that Windows Phone desperately needs.