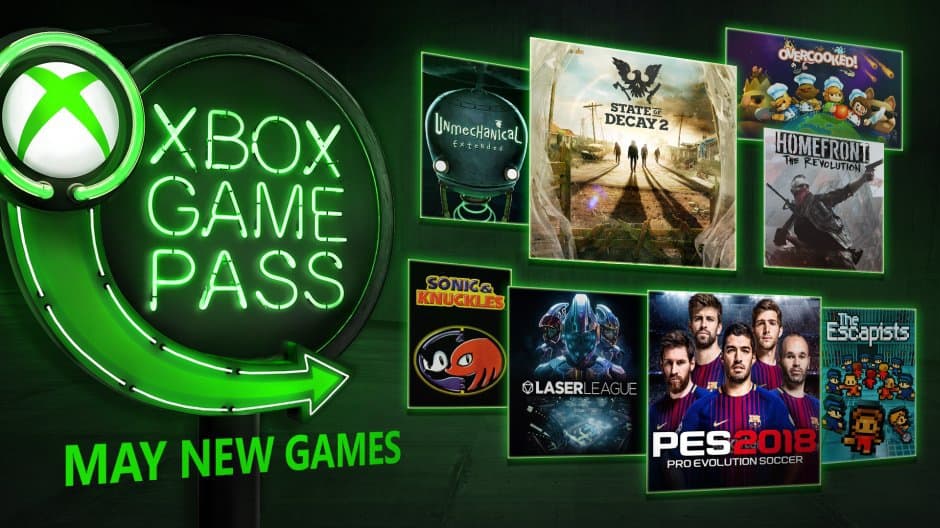 The Xbox team has just announced that eight new games will be added to the Xbox Games Pass catalog in May, including the upcoming Microsoft Studios title State of Decay 2. Just like Sea of Thieves, the zombie survival game will be available on Game Pass on launch day, which is May 22.

The first State of Decay game was pretty well received, and there is quite a lot of hype around its sequel. State of Decay 2 will support Xbox Play Anywhere and cross-platform multiplayer, and the new four-player co-op mode looks really exciting.

Also coming to Game Pass in May is Pro Evolution Soccer 2018, the first soccer game to be available in the catalog. The timing is interesting considering that EA’s FIFA 18 is expected to join the EA Access Vault very soon.

The six other games coming to the catalog are not too shabby either: get ready to play Homefront: The Revolution, The Escapists, Unmechanical: Extended, Overcooked, Laser League and the old-school gem Sonic & Knuckles on your Xbox One next month.

This is a pretty cool Xbox Games Pass update overall, and we’re looking forward to seeing if State of Decay 2 can reach the same level of momentum as Sea of Thieves, which recently crossed 2 million players. Last but not least, we remind you that NBA 2K17, WWE 2K17, and Lumo will be leaving the Xbox Games Pass catalog at the end of the month, so make sure to play them while you can.

If you're not already an Xbox Game Pass Subscriber, you can currently take advantage of a special offer where you can get one month of the service for just $1. This will give you access to the titles announced today and the many other Xbox Exclusives as part of the Endless Play Sale.