Each Windows 10 update comes with at least one significant new feature, and the biggest one in the Windows 10 April 2018 Update is Windows Timeline. As you may recall, Windows Timeline was first introduced in the Insider versions leading up to the Fall Creators Update, but didn't ship in the final release so Microsoft could put more development time into the feature. Anyway, it's finally here, and it sets off to change the way that users interact with Windows 10.

Windows Timeline is powered by Microsoft's Project Rome cross-platform project and allows you to resume past activities started on your Windows PCs, and your iOS and Android devices linked to a Microsoft account. You can summon Windows Timeline by pressing the task view button, which has now changed (but still will still allow you to access virtual desktops.) The feature depends on a collection of "activities" to work, which is basically a combination of your previously used and opened apps and files.

After pressing the icon, you'll see that all of your "activities" from across your devices for the past 30 days are listed chronologically. These "activities best collect information from Microsoft Edge and UWP apps and currently won't work for party third party apps like Google Chrome. Microsoft, though, has said it is working with developers to get them on board with the feature.

The second major new feature in the Windows 10 April 2018 Update is Near Share. As the name suggests, this feature leverages the power of Bluetooth and WiFi to allow you to share files between PCs. It's off by default, and you'll need to enable it in the shared experience settings for it to work. I do think it would be nice of Near Share would also work for file sharing between iOS or Android devices, but I guess that's where OneDrive can step in. Anyway, it is still a pretty cool feature that is very similar to Apple's Airdrop on MacOS and iOS.

The UWP was Microsoft's big bet to help fill the app gap, but the company is now backing away and making Progressive Web Apps "first-class citizens" with the Windows 10 April 2018 Update. This is thanks to some updates to Edge, which now supports Service Workers and allows websites to send notifications in the background when Edge is not in use. Twitter was the first developer to come on board with the PWA, and now more PWAs have made their way to the store. These apps are built on standard web language and aren't platform specific, meaning they're much more easily updateable. 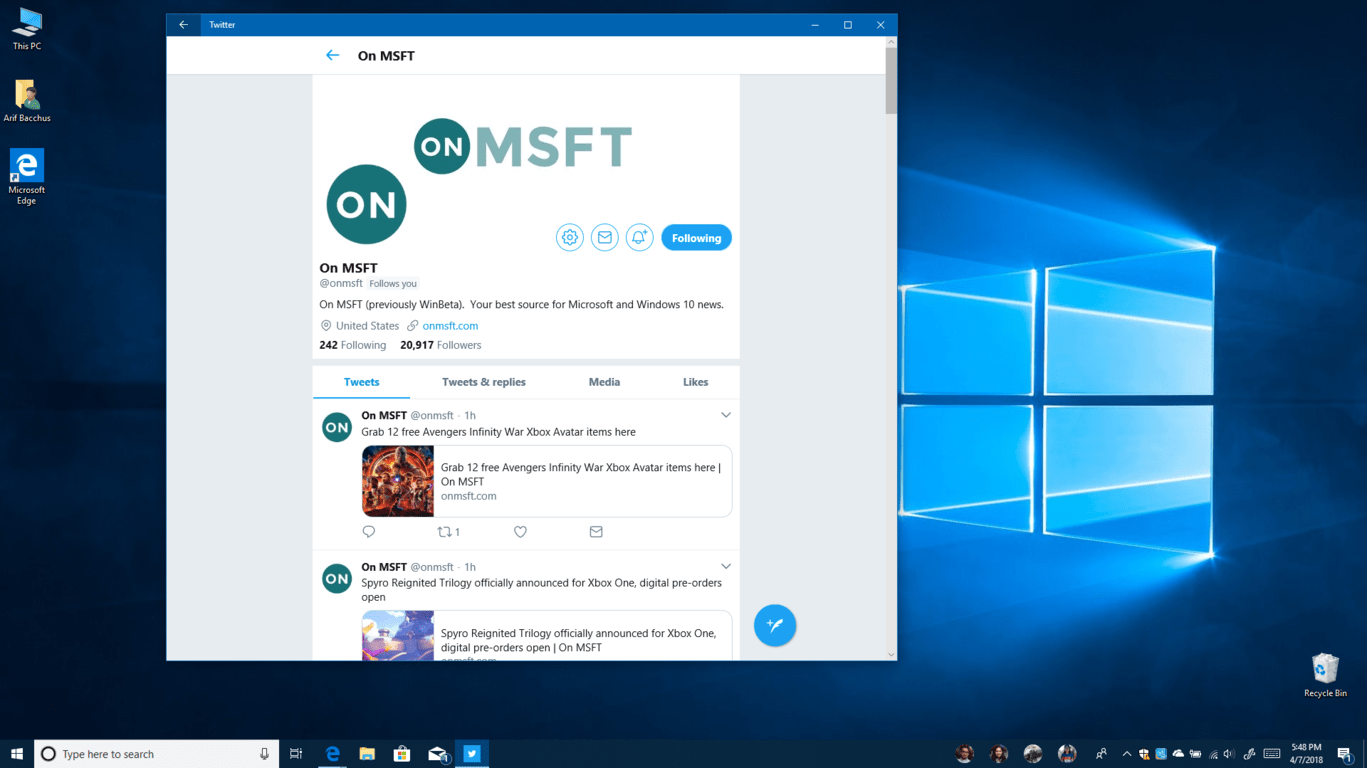 The first thing most people will notice new in Edge is a slimmer and improved UI that includes more of Microsoft's Fluent Design design language. There are "Reveal" and "Acrylic" effects that now follow your mouse when you hover over elements of the address bar. Microsoft also improved the Hub in Edge, which now makes your bookmarks, books, history, and reading lists easier to find and read. Other improvements for the UI include an enhanced dark mode which provides better contrast and is more easy on the eyes. Finally, the browser now supports Extensions in InPrivate mode, which has been a long requested feature.

Microsoft's Fluent Design language first appeared in Windows 10 back in the Fall of last year, but more of it is returning in the Windows 10 April 2018 Update. Fluent Design's glass-looking Acrylic and the Reveal effect have now spread to the two core areas of the Windows Shell.

With this update, you should see that there is now a Reveal effect on the Start menu. You'll now get a nice highlight when hovering your mouse over the names apps or live tiles. You will also notice the same effect on the calendar in the system tray whenever you hover over the number days of the week.

The Acrylic effect, meanwhile, is now more prevalent on the backgrounds of the start menu, and on the taskbar. It looks a lot like the "Aero" of  Windows 7, and you can notice the cool difference it makes whenever you turn on Battery Saver (which can now be used to disable Fluent Design across the OS and conserve energy.)

Since the Cortana digital assistant is now available on iOS, Android, and Windows, Microsoft is using the Windows 10 April 2018 Update as a way to further enhance its functionality when you use Windows 10. You'll notice that Cortana's usual suggested content (weather, movies, etc) is no longer present when you summon the assistant from the Taskbar. Instead, Microsoft updated the main page of Cortana to suggest you to pick up where you left off.

Microsoft also updated Cortana's UI by adding in a new "Organizer" and "Manage list" and "Collections" functionality in the Cortana notebook. These features are meant to sync up with Cortana on your phone, help you stay more productive, and also give you more suggestions. For extra personalization, the user picture is also there in the notebook now too. Finally, Microsoft added a new "Skills" tab to the notebook to help you manage the services you've connected to the digital assistant.

The Game Bar is the home for games streaming in Windows 10, and it gets even better in the Windows 10 April 2018 Update. Microsoft has completely revamped the experience, bringing it up to date with  Fluent Design. Users can now see what is behind the Game Bar UI, and enjoy both light and dark modes. The new Game Bar also replaces the Xbox gamer icon with the user's profile name. Other changes include new links to Mixer Profiles, a screenshot option, and a delay recording feature.

A big complaint from many Windows users was that Microsoft collects too much diagnostics information in Windows 10 without user consent. Well, the Windows 10 April 2018 Update addresses privacy concerns by including a new diagnostics data viewer, and settings options to opt out of sharing typing and inking data collection and find my device. There's also a new out of the box experience which revamps the setup process to put more emphasis on privacy.

You also can now use the Settings app to limit download bandwidth for Windows updates, manage what data is stored in Timeline, and add keyboards directly from the settings app. Those who have PCs with multiple GPUs will also find new settings to help them manage which GPU they'd like apps to use.

The final big change is expanded HDR support on Windows 10, a setting which was previously only available for those with advanced graphics cards on the Fall Creators Update. The enhanced support means users who have regular standard resolution screens can now enhance their settings to view HDR videos. The option is available for certain video streaming apps which support HDR like Netflix. You can search for "Video playback options" in Settings, where you can calibrate and preview what video will look like with HDR enabled.

My People was first introduced in the Fall of 2017, and it is getting some enhancement for the Windows 10 April 2018 Update. You can now drag and drop any contacts pinned to your taskbar, helping you rearrange them to your own liking. You also can manage how many of your "People" show up in your taskbar, going to as much as 10. This is great, but not a lot of Windows 10 apps currently integrate with MyPeople, and we're hoping that Microsoft will add more over time.

Microsoft debuts Office 2019 as a Preview for business customers