Microsoft and many of the players, coaches, and announcers in the NFL have seemingly had a contentious relationship to put things nicely.

When news broke of the multi-billion dollar deal, Microsoft struck with the NFL to market and promote its Surface tablets many observers saw it as nothing more than a cash grab for the NFL, and since then the league has proven them mostly correct.

Year after year, the NFL has managed to grab headline attention for its fumbling of partnered promotion of Microsoft’s Surface tablet.

Despite the very public embarrassments the Surface tablet brand has suffered at the mishandling of the NFL, Microsoft remains committed to its partnership with the league, and many of the players and coaches are proving to be real fans of the tech.

Microsoft and many of the players, coaches, and announcers in the NFL have seemingly had a contentious relationship to put things nicely. When news broke of the multi-billion dollar deal, Microsoft struck with the NFL to market and promote its Surface tablets many observers saw it as nothing more th

While most of the headlines during the Microsoft and NFL partnership have painted the collaboration in a negative light, writer Athima Chansanachi grabs a more in-depth analysis of the relationship between the two.

Here are a few key quotes from Chansanchi’s report:

We have a unique technology partnership with the NFL,” says James Bernstrom, Microsoft product marketing director for Windows and Devices Marketing. “They know football; we know technology. We’re able to provide a consistent, reliable experience, and that allows them to focus on football.”

Contrary to the recent sentiments from New England Patriots head coach Bill Belichick, use of the updated Surface Pro 4 on the sidelines has been welcomed by most.

We live and die by those things on the sidelines,” says Brandon Fisher, defensive backs coach for the Los Angeles Rams. “When we’re not on the field we are adjusting, and everybody is surrounding the one Surface. That’s our livelihood on Sundays, those things.” He added that it’s helpful to have four focused pictures that they can zoom in on, rather than two black-and-white photos. 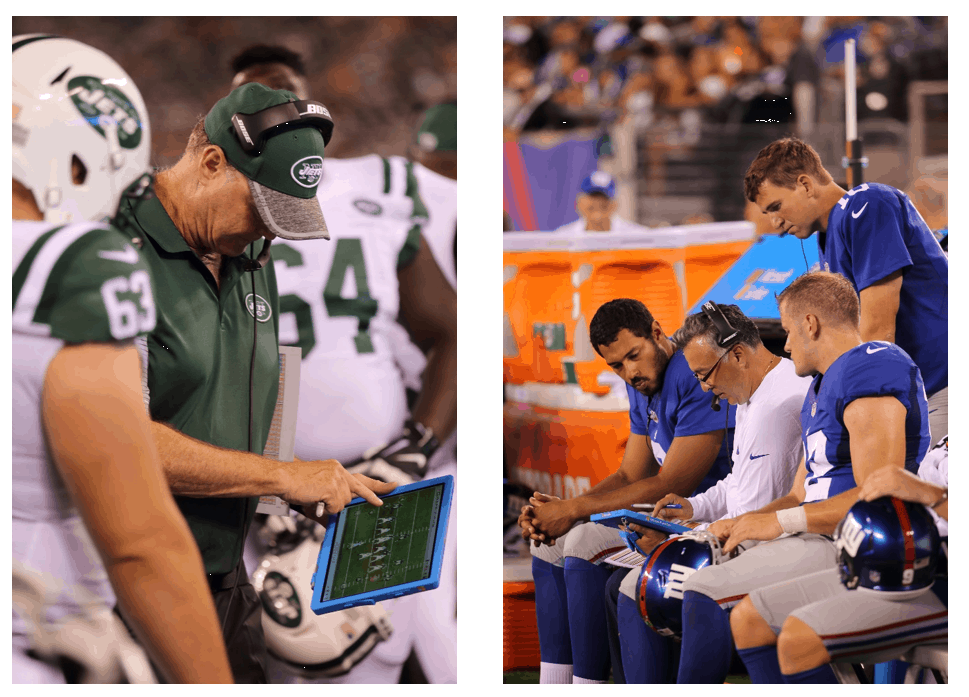 Surface on the sideline

Despite the numerous headlines discussing the Surface tablet and the NFL, Microsoft’s partnership goes even further than just hardware.
Software wise, Microsoft and the NFL have developed apps for Windows 10 and the Xbox One as well as collaborations on games such as Madden that help immerse football fans in a world stats and gameplay.

Now, the command centers on both apps – hubs for all the action, similar to a home page – will give users the ability to customize the chips (tiles) by choosing two of their favorite teams to follow, up from one last year. They’ll also be able to toggle between the “Madden” game views and the live game. (CBS and Yahoo fantasy football aren’t available on the Windows 10 app.)

Users will also be able to stream live up to 10 Thursday night games thanks to Twitter through the app, without the need for a cable subscription. There are additional options too. Fans who want to watch every game through both apps can buy NFL Game Pass or the NFL Sunday Ticket on Direct TV (for Xbox One only). If you have Game Pass, you can watch a condensed version of the game of your choice on Windows 10 or Xbox One. With NFL Now, you can watch clips, get news and see big plays.

To read more about how the NFL and Microsoft are making the best of this multi-year multi-billion dollar partnership, give Chanasanchai’s report a read.