Get a jump on the holidays with November's Games With Gold - OnMSFT.com Skip to content
We're hedging our bets! You can now follow OnMSFT.com on Mastadon or Tumblr! 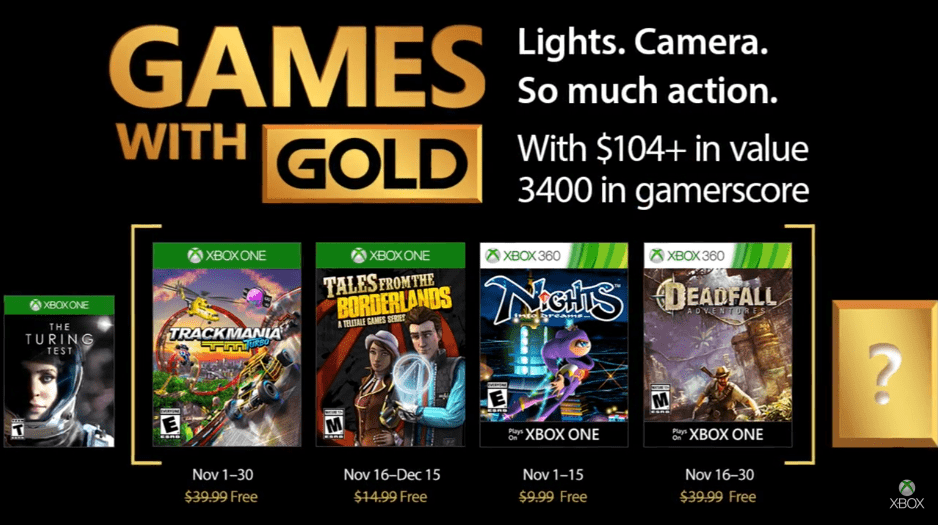 The Xbox team has just announced November’s Games with Gold, and Xbox Live Gold members can look forward to have some good time with four new cool games next month. On the Xbox One, racing game TrackMania Turbo and Telltale Games’ Tales from the Borderlands should be a lot of fun for most gamers. In addition, the backward compatible Xbox 360 games NiGHTS into Dreams… and Deadfall Adventure will also be free with your subscription.

Overall, these four games represent $104+ in value and 3400 in gamerscore, and you can find official descriptions and video trailers for each of them below:

Available for the first time on Xbox One, Trackmania offers you the ultimate arcade racing universe. Test your skills in outlandish tracks and challenge your friends at home (offline splitscreen) or online.

Set on the unforgiving world of Pandora after the events seen in Borderlands 2, this is a story full of Borderlands’ trademark humor, following two adventurers on their quest for greatness. You’ll play as Rhys, a Hyperion ‘suit’ with dreams of being the next Handsome Jack, and Fiona, a Pandoran con artist looking to score her biggest ever swindle. Thrown together as unwilling partners in an adventure to recover cash they both think is theirs, their journey will take you on a wild ride where gangsters, bandit lords, and Vault Hunters are just some of the obstacles you’ll encounter, in this new take on the award-winning universe created by Gearbox Software.

Slip off into the dream world and go on an aerial adventure as NiGHTS in this classic Saturn remake. Collect Ideya (colored orbs), rack up points, and battle bosses to help Elliot and Claris save Nightopia from Wizeman the Wicked. With all 7 original dreams, enhanced graphics, achievements, leaderboards, and playable content from Christmas NiGHTS, this beloved title is back and better than ever.

“All things live forever, though at times they sleep and are forgotten.” You are James Lee Quatermain, descendant of the legendary adventurer Allan Quatermain. Reluctantly, Quatermain agrees to help the US government find a powerful artefact before the Nazis or the Russians do. Its pieces are hidden in ancient temples across the globe, protected by deadly traps and raging mummies. Ready your guns, because the hunt is on.

Are you excited about the November's Games with Gold lineup? Let us know in the comments which of these games you're looking forward to play on your Xbox One next month.

Over 70% of Windows phones still in use are running WP 8.1, says latest AdDuplex report