Did you miss it? Windows 10 Insider build 16215 released late yesterday with lots of new features

Following three weeks without a new build, the Windows Insider team finally pushed the big red button yesterday, rolling out a massive list of new features for Fast Ring Windows Insiders. Unfortunately, there was pretty much nothing to see on the phone side, especially the recently discovered Composable Shell, but the Windows 10 PC build 16215 seems like the biggest preview release in ages.

If you missed the news yesterday (the build was released late in the day Redmond time), you should know that the new preview build introduced some new Fluent Design touches for the Windows 10 Start Menu and Action Center. Fluent Design is still very much a work in progress, but it’s worth noting that the Action Center has also been redesigned with clearer information separation and hierarchy.

The Windows 10 Shell and Settings menu also received some love in this update: highlights include several bug fixes and improvements for My People and Night Light, but Microsoft has also improved the functionality of the Share button, which now lets you copy links in your clipboard to paste into your app of choice. Moreover, the Settings panel has been slightly redesigned  and the order of the Settings categories have been readjusted.

If you’re a PC gamer, you should pay attention to the latest improvements to Game Mode, which received some performance tweaks on popular PC configurations. If you regularly use the Game Bar when playing, you should also know that the tool now lets you take screenshots of games running in glorious 4K and HDR.

Cortana and Microsoft Edge also received some interesting new features: the web browser now lets you annotate EPUB books and pin your favorite websites to the Windows 10 taskbar (a popular request, without a doubt), while the digital assistant has been improved with what Microsoft calls “vision intelligence.” Concretely, Cortana can now create reminders after analyzing pictures from your camera roll, such as posters or flyers. Moreover, a new “Lasso” feature lets pen users circle information on an image to let Cortana suggests follow-ups.

If you can already use various Cortana voice commands on Windows 10, the Windows 10 build 16215 finally brings a more versatile Voice Dictation feature on the desktop. For now, Voice dictation is only available for English (US) and Chinese (Simplified) input methods: you can use Dication by tapping the microphone icon in the top left corner of the touch keyboard or handwriting panel, or press the new dictation hotkey (Win + H). Microsoft has also enabled various voice commands to input ponctuation, do basic editing and more.

The handwriting experience is also much improved with the Windows 10 build 16215, thanks to new features such as new conversion & overflow mode, Easier access to emoji and symbols and more accurate palm rejection. Microsoft didn’t forgot pen users too, introducing a “Find my pen” feature as well as other pen interactions improvements including scrolling and selection.

Those of you looking for keyboard improvements in this list will be pleased to learn about several new handy features: there is a new Emoji Panel accessible with Win + period (.) or Win + semicolon (;), which seems perfect for quick access to your favorite emojis. Moreover, the touch keyboard experience has been improved with the first shape writing keyboard on PC: for those unfamiliar, shape writing lets you swipe over the keys without releasing your finger on the screen, just like you can do on a Windows phone. 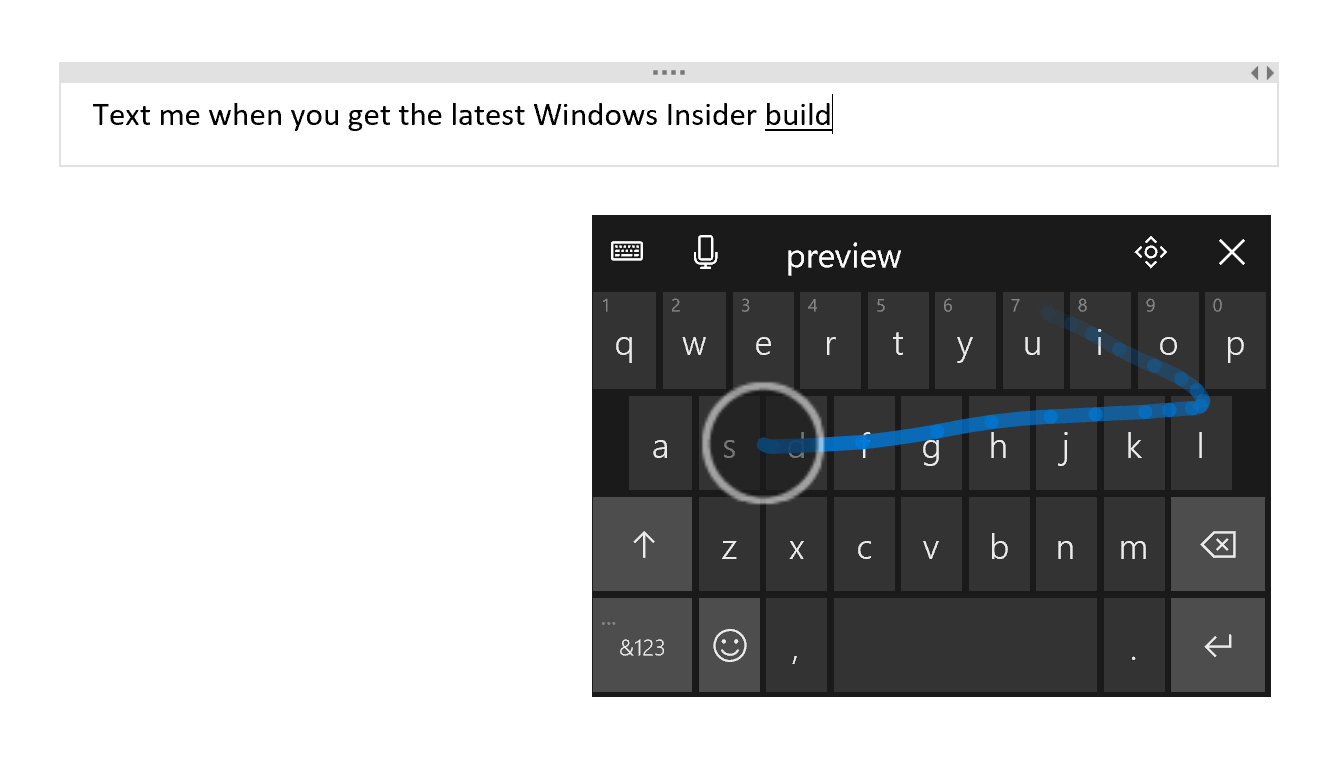 Last but not least, Microsoft brought several new Accessibility features in this build, including various narrator improvements (Scan Mode is now on by Default), new color filters and an updated Magnifier Zoom. Overall, this really looks to be one the most important releases since Microsoft rolled out the first Redstone 3 builds this Spring, and we invite you to check our other posts to get more details about these new features. We're very much looking forward to see what the Windows Insider team will bring us next, and we hope you are too!