When Microsoft introduced the original Xbox One back in 2013, you may remember that the company received a lot of criticism for putting too much emphasis on multimedia features instead of games. This confusing messaging certainly benefited Sony, which marketed its more affordable and slightly more powerful Playstation 4 as the console "for the players."

To be fair, Microsoft's vision for an all-in-one media center wasn't completely out of touch: since Sony's Playstation 2 shipped with a DVD player in the early 2000's, consumers have been increasingly using gaming consoles for various non-gaming purposes. And today, both Microsoft's Xbox One and Sony's Playstation 4 include a web browser and an app store to let consumers use popular apps such as Netflix and YouTube.

Playing games without a hassle will always remain the main reason consumers purchase gaming consoles these days, though it's clear that consoles have now become platforms where consumers expect to find the same apps they use on all their devices. And fortunately for Microsoft, it seems that Xbox One owners spend a lot of time using apps on the gaming console.

Today, a new report from Ars Technica reveals some interesting details about Xbox One usage. The data from the report was randomly sampled from around 79M+ Xbox Live Gamertags using a third-party API, and it gives us a pretty good idea of what are the most popular games and apps on the gaming console today.

This may not be completely surprising, but Ars Technica's sample reveals that blockbuster games from EA, Rockstar Games and Activision are the most played games on the Xbox One: a selection of just 12 games including Battlefield 1, FIFA 17, GTA V and Call of Duty: Infinite Warfare represent more than 50% of Xbox One play time. 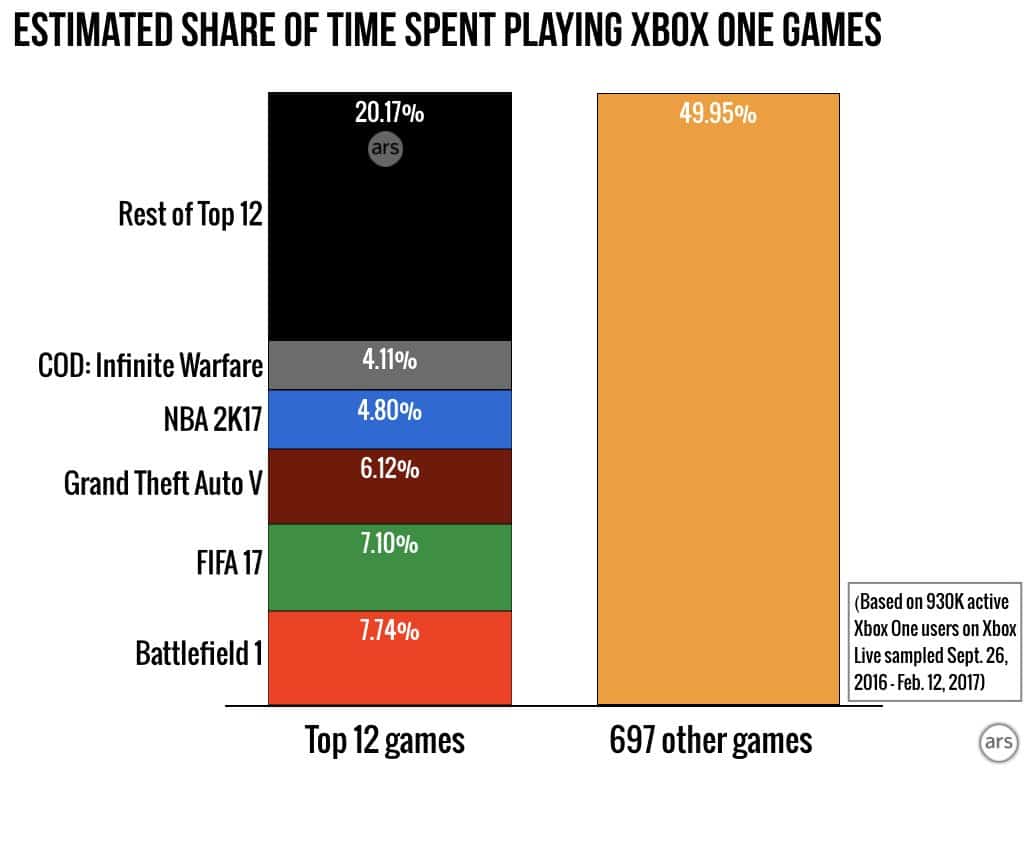 If Xbox One games account for 54.7% of time spent on Xbox One content, Netflix, YouTube and other non-game apps represent 43.9% of the rest. Surprisingly, Xbox 360 backward compatible games are an incredibly small amount of total Xbox One usage (1.5%) in the sample. "For context, that means the hundreds of backward compatible Xbox 360 games combine to represent less than half of the play time that a game like Grand Theft Auto V manages on its own," explained Ars Technica. 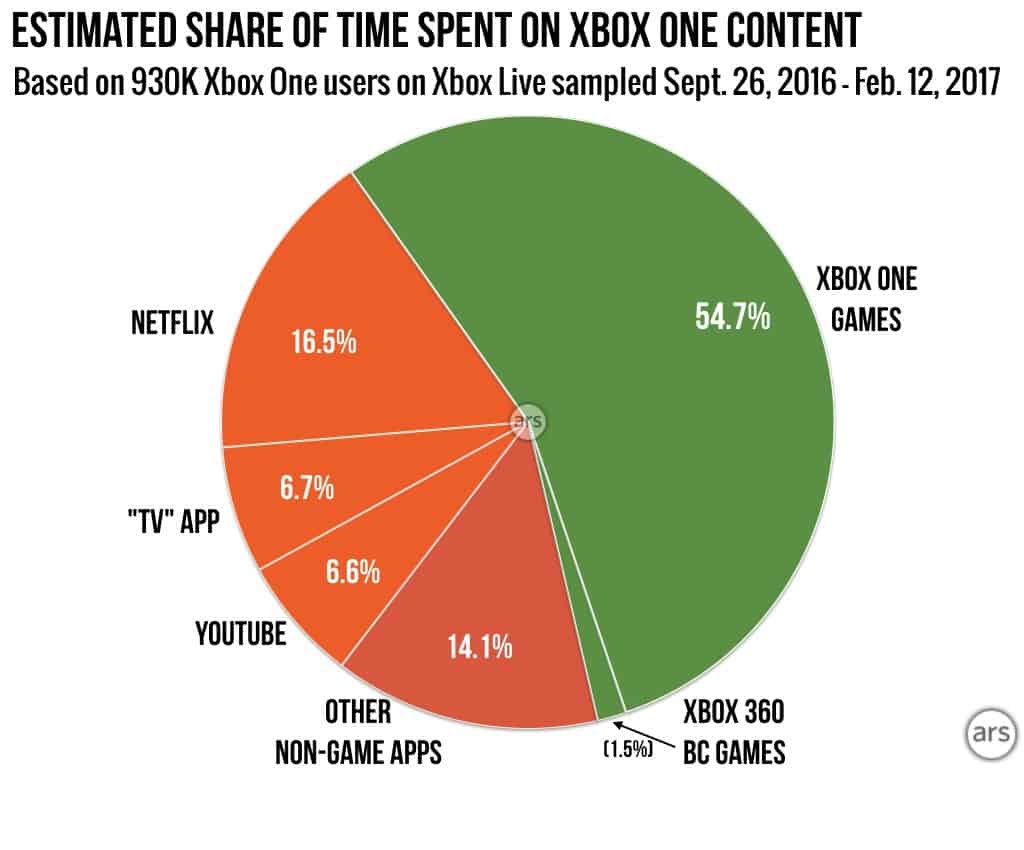 Since Microsoft introduced Backward Compatibility on the Xbox One in late 2015, the company emphasized it as one of the killer features of the gaming console, which probably swayed many Xbox 360 owners to upgrade. Microsoft obviously gets good PR from all the new games that are regularly added to the list, and the new feature seem to clearly benefit some publishers as well: last year, sales of Red Dead Redemption increased 5,838 percent on Amazon just a day after the game became backward compatible on the Xbox One.

As it turns out, Xbox One owners may not be that interested in old Xbox 360 titles, but you can expect Microsoft to keep banging the Backward Compatibility drum in the future. Today, Xbox exec Mike Ybarra publicly reacted to Sony saying that old games are not worth pursuing, explaining on Twitter that "we want gamers to play the best games of the past, current, and future."

Disagree. We want gamers to play the best games of the past, current, and future. It's what gamers have asked for. https://t.co/iMtprzgBQI

Backward compatible games may not be the Xbox One's killer app, but it's also worth noting that Microsoft didn't completely abandon its vision for an all-in-one entertainment system. Last year, the new Xbox One S was clearly advertised as "the ultimate games and entertainment system," being the first gaming console with 4K video streaming, High Dynamic Range support for games and video and a 4K Blu-ray player (something that Sony was heavily criticized for not including in its latest Playstation 4 models).

By bringing more and more UWP apps to the Windows Store and teasing upcoming PC-like features such as keyboard an mouse support, Microsoft is slowly but surely raising the bar for what we can expect from a gaming console in 2017. Later this week, we'll see during Microsoft's E3 press briefing if Project Scorpio brings back the focus to games or continues to evolve the Xbox One into an all-in-one entertainment system.

Microsoft details how, when to watch E3 events

The Elder Scrolls Online: Morrowind is now available to play