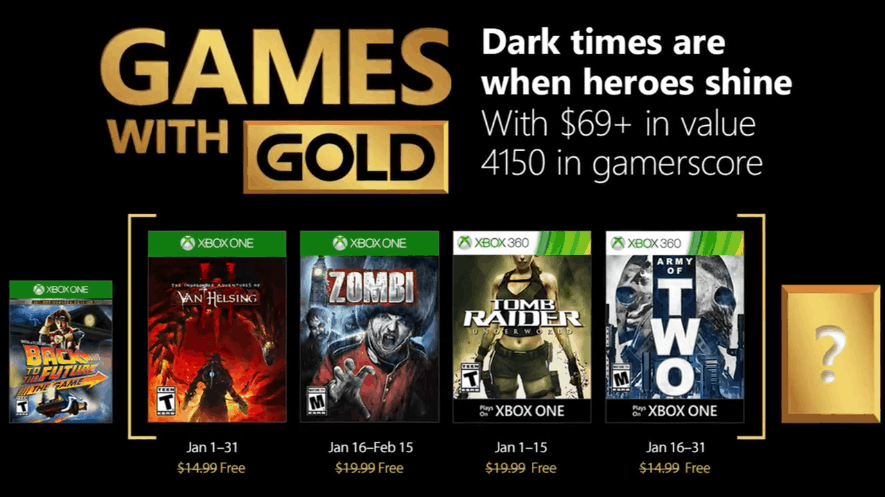 As 2017 is coming to a close, the Xbox team has just announced the first Games with Gold titles of 2018 today. On the Xbox One, The Incredible Adventures of Van Helsing III will be launching with Games with Gold on January 1, followed by the FPS survival game ZOMBI on January 16. These two games will be joined by the Xbox 360 titles Tomb Raider Underworld and Army of Two, which are also backward compatible on the Xbox One.

Overall, these four titles represent $69 in value and 4150 in gamerscore, which is not bad to kick off the new year. You can find more details about all these games below:

In Van Helsing III, the civil war is over in Borgovia, but the future looks grim. The city of weird science is in ruins, squabbling factions and criminals fight for power and a strange cult prophesizes the coming of “The end of times.” And they might be just right: A wave of uncanny events shakes the land, and it’s all connected to a mysterious creature, a former ally turned into a fearful arch-villain. Which means that Van Helsing will do what he does best: He wields weapons, prepares his deadly tricks, and hunts down the most dangerous monster who has ever lived… and this time it’s personal. He’s prepared to do anything to achieve his goal, even to face the darkest secret about the birth of the modern Borgovia.

For the second time in history, a great plague has shrouded London in a fog of death. Big Ben tolls as thousands of unprepared die, or worse, are infected by a sickness more gruesome than death. You’re still breathing, for now, but how long will you survive the labyrinth of London’s streets and underground canals, abandoned by the outside world and surrounded by infected? Zombi takes the power of the latest generation of hardware to bring you a new level of horror. Test your will to survive, but beware: death is permanent, and one wrong move can cause you to lose everything.

esigned specifically to take advantage of the latest technologies Tomb Raider Underworld represents a new advancement in exploration-based gameplay. As fearless adventurer Lara Croft explore exotic locations around the world, each designed with an incredible attention to detail resulting in breathtaking high-definition visual fidelity that creates a truly believable world and delivers a new level of challenge and choice.

When one man is not enough, it will take an army of two to fight through war, political turmoil and a conspiracy so vast it threatens the entire world. There are no refunds for this item. For more information, see www.xbox.com/live/accounts. Some multi-player functionalities may no longer be supported.

In case you missed it, you can get one month of Xbox Live Gold for just $1 through January 5. Make sure to also check out the last Games with Gold titles for December, as well as the just-announced Xbox Countdown to 2018 Sale.

Xbox helps celebrate the season of giving with GameChanger partnership