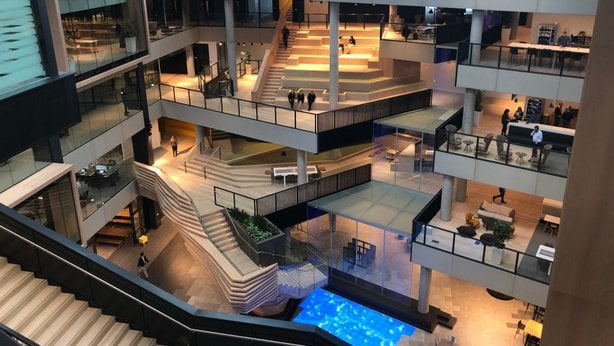 Noted by Ireland's National Public Service Broadcaster, after nearly three years of construction, Microsoft has finally opened their new South Dublin Ireland headquarters. Located in Leopardstown, Microsoft says the new 34,000 square meter building is a "representation of the cultural transformation" that the company has experienced in recent years (via MSPoweruser.)

2,000 employees will be working in the new building, showing that Microsoft is well committed and invested in Ireland. The campus features a large open "Dreamspace' which can be used to educate children and others about STEM fields. More standard features of the campus include a "Harbor" entrance area, a fitness room, a yoga studio, a nail bar, massage room and a music room.

Big crowd gathering for opening of @Microsoft swish new campus in Dublin. 34,000sq m of space, €134m price tag. Room for the 2,000 employees and then some. pic.twitter.com/XFDyrrmVgb

"I think this building epitomises the future for Microsoft and it is us opening our doors to our customers, the community, to have an impact on society as a whole... What we are doing in this building is bringing all of the teams together, whether it is engineering, or operations or digital sales, and helping them to innovate in this new culture of one Microsoft..."

Interestingly, there are no offices in the new campus, and employees instead sit in "neighborhoods" which have different areas across the floor. There are, however, 80 meeting rooms, and a technology center which can seat up to 3,000 people.

5G Always Connected Windows 10 Laptops coming in the second half of 2019, Intel says