Tracking Windows Phone's market share across major markets has become something increasingly less interesting to do over the past couple of months. Indeed, you probably already all know the truth: Windows Phone has slowly become irrelevant since Microsoft scaled back its mobile efforts following the release of the Lumia 950 and 950XL, and its market share has decreased significantly last year.

During Q3 2016, Windows Phone's market share fell below 1% in the US according to Kantar, and it wasn't clear how the situation could improve this year with no new hardware on the horizon. However, Kantar's latest data from the three months ending in February 2017 shows that Windows Phone is back to a 1.7% market share in the country (down 0.9% points year-over-year though), which is quite unexpected. Compared to last month's data for the three months ending in January 2017, Windows Phone is also slighlty up in the UK (2.1%, down 6.7% year-over-year), while its market share in EU5 remained at 2.7% (down 3.3% YoY). 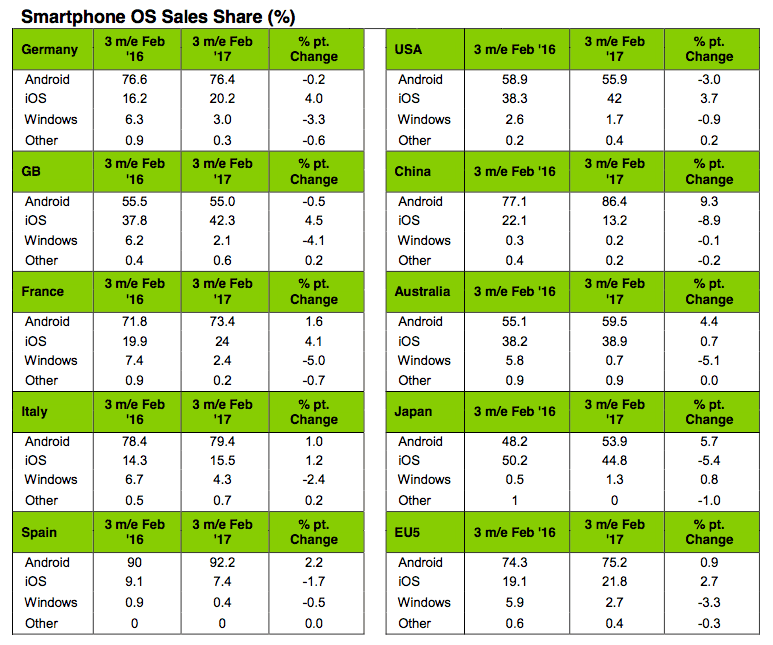 Kantar's latest report also highlighted significant iOS gains in both the US and the UK where Apple's mobile OS rose to 42% and 42,3%, respectively. "iPhone 7 and iPhone 7 Plus remained the top-selling smartphones in the US where they have been in the lead since the three months ending November 2016," added the market research company. While we're now firmly living in a two-OS world, Kantar's Global Consumer Insight Director Lauren Guenveur noted that the recent launch of new Android flagships following MWC 2017 may change the balance of power in the coming months:

The February period is always a challenging time to report on consumer behaviour and plans, since many people put purchases on hold following the holidays, waiting for the latest phone announcements from Mobile World Congress. The much-anticipated March 29 announcement of the Samsung Galaxy S8, combined with the somewhat unexpected launch of the (PRODUCT) RED iPhone 7 and iPhone 7 Plus, and the capacity upgrade to iPhone SE a week before that, may mean that the remainder of Q1 and Q2 could yield some interesting, even unpredictable, shifts in the market.

It remains to be seen if Windows Phone can maintain itself above the 1% mark in the US in the coming months, but we have some doubts about it. Microsoft announced last week that the Windows 10 Mobile Creators Update won't be released for a lot of old Lumia handsets, and we're not sure if the disappointing news will push many of you to upgrade to a new Windows phone. As Microsoft's roadmap for Windows 10 Mobile is still uncertain, would you rather buy an Alcatel Idol 4S or an HP Elite x3 rather than an iPhone 7 or a Galaxy S8? In other words, do you think there is still a market for Windows phones with very few manufacturers still supporting the platform? Let us know your thoughts in the comments below.