Rush: A DisneyPixar Adventure is now available to play on Microsoft's family of Xbox One consoles and Windows 10 PCs.

The game is a re-release of an Xbox 360 title but has been given new content, a visual upgrade to 4K HDR (when played on an Xbox One X or strong enough PC), and has been given Xbox Play Anywhere functionality which means that buying it on Xbox One will unlock it on Windows 10 and vice versa. Here's the official game description.

Rush: A DisneyPixar Adventure invites families and fans of all ages to experience the worlds of six beloved DisneyPixar films like never before. Team up with characters from The Incredibles, Ratatouille, Up, Cars, Toy Story, and Finding Dory to solve puzzles and uncover hidden secrets all remastered in 4K Ultra HD and HDR. You and your favorite Pixar character can interact on screen and play cooperatively to solve challenges. Move from fast-paced puzzle-solving to moments of pulse-pounding agility and speed.

Like the original game, Rush: A DisneyPixar Adventure also supports Kinect functionality when played on console, much like the recently released Disneyland Adventures and Zoo Tycoon titles. Are you going to buy this game and will you be using Kinect? Let us know in the comments below. 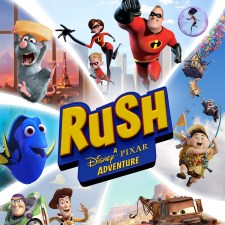