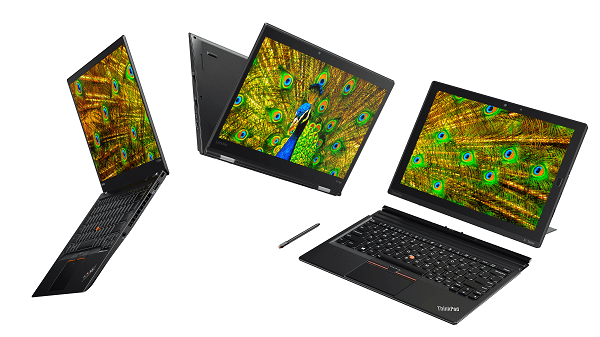 Just a week after Lenovo unveiled an updated Thinkpad lineup featuring Intel’s latest processors, Microsoft’s Precision TouchPads and Windows Hello support, the Chinese company announced today at CES 2017 a similar refresh for its flagship Thinkpad X1 line. Additionally, there is a new Miix 720 hybrid tablet for those of you looking for an alternative to Microsoft’s aging Surface Pro 4. Let’s dive into the details below.

Lenovo’s new ThinkPad X1 Carbon laptop is a slimmer and lighter iteration of its business-focused laptop, weighing just 2.5 pounds (1.14kg) and featuring a 14-inch IPS display into a 13-inch form factor. It will be available in both classic ThinkPad black and a new Silver color, and business users can expect to get up to 15.5 hours of battery life. Other highlights include:

The ThinkPad X1 Carbon will start shipping in February with a $1,349 starting price.

Lenovo’s ThinkPad X1 Yoga convertible laptop shares many of the improvements from the X1 Carbon including a new silver option, 15 hours of battery life, USB Type-C ports and a Microsoft Precision Trackpad. Other highlights include a 14-inch OLED display, a new keyboard that retracts fully flat in tablet mode and a redesigned rechargeable ThinkPad Pen Pro. The ThinkPad X1 Yoga will also start shipping in February with a $1,499 starting price.

The ThinkPad X1 tablet is also updated with new Intel Core processors, but the 2-in-1 device also features great versatility with additional modules bringing port expansion, up to 5 hours of extra battery life and an integrated projector option. The ThinkPad X1 Tablet will start shipping in the US in March with a $949 starting price.

Last but not least, Lenovo also introduced the Miix 720 Windows 10 detachable tablet measuring in at just 0.57 in (14.6 mm) and 2.4 lbs (1.1 kg). The hybrid devices includes a full-size backlit keyboard with a Precision Touchpad, and the company claims that its improved dual kickstand hinges “offer a noticeably smoother rotation and firmer rigidity than before.” Other highlights include:

The Miix 720 will be available in two colors – Champagne Gold and Iron Gray – when it will start shipping in April at $999.99. Lenovo made several other hardware announcements today, so stay tuned on OnMSFT to get all the latest news from CES 2017.