Twitter user, WalkingCat, has discovered something that reveals a lot more context to the upcoming Windows 10 Dynamic Lock feature that was revealed two days ago.

The discovery in question is an official Microsoft slideshow published a few days ago which recaps information presented at the WinHEC event which was held in China last month. On Slide 18, a new feature called, Windows Hello Proximity Lock, is mentioned and, while noticeably sporting a different name than the Dynamic Lock feature unveiled a few days ago, it does sound completely identical and is likely one and the same. 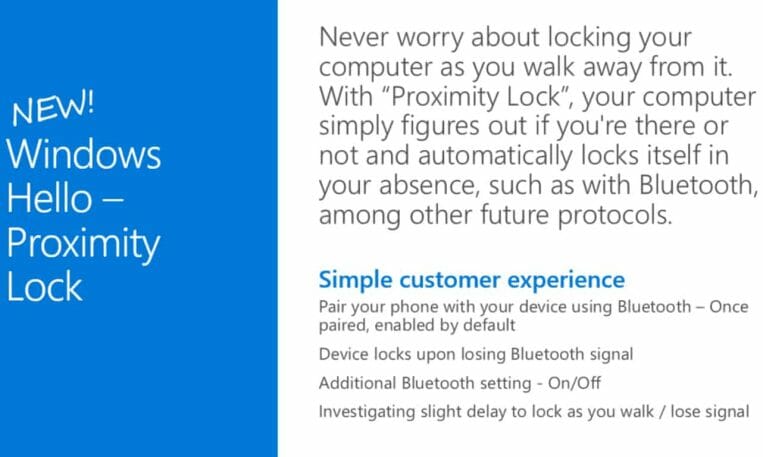 When Dynamic/Proximity Lock was initially discovered in a preview build, all users had to go on was its ambiguous description in Settings that read, “Allow Windows to detect when you’re away and automatically lock the device.” Many speculated that this setting would involve a webcam in the same way Windows Hello uses one to unlock Windows 10 devices but this description suggests that Bluetooth technology would primarily be used instead with the possibility for other “future protocols” to also play a role eventually. A camera could still be used, but for right now it seems as if Bluetooth is at least confirmed. Here’s the description from the slide:

It’s unconfirmed when this feature, whatever it ends up being called, will be made publically available to general Windows 10 users but it could likely show up in the Windows 10 Creators Update which is expected sometime in the first half of 2017.

Do you think this feature is a good idea? Let us know in the comments below.