Microsoft’s Surface Duo is “not meant to be repaired,” says iFixit

Repair website iFixIt is back with a new teardown, and despite the gains Microsoft made with the Surface Pro X and Surface Laptop 3, this time things aren’t in favor of the Redmond giant. In its latest teardown, iFixit gives the Surface Duo a score of 2/10.

According to a press release from the repair website, this score means Surface Duo is not something “that is meant to be repaired, maybe not even by Microsoft.” Factors in the score include very easy to slice cables, sticky glue traps, and the pains of replacing the battery.

iFixit’s only high was the displays and the back covers being able to be replaced without disassembling other components. Unfortunately, though, the batteries being glued, and the USB-C port being soldered contributed to the low score. Other issues include uncommon tri-point screws, OLED panels not being protected from accidental prying, and the stubborn glue at all entry points. 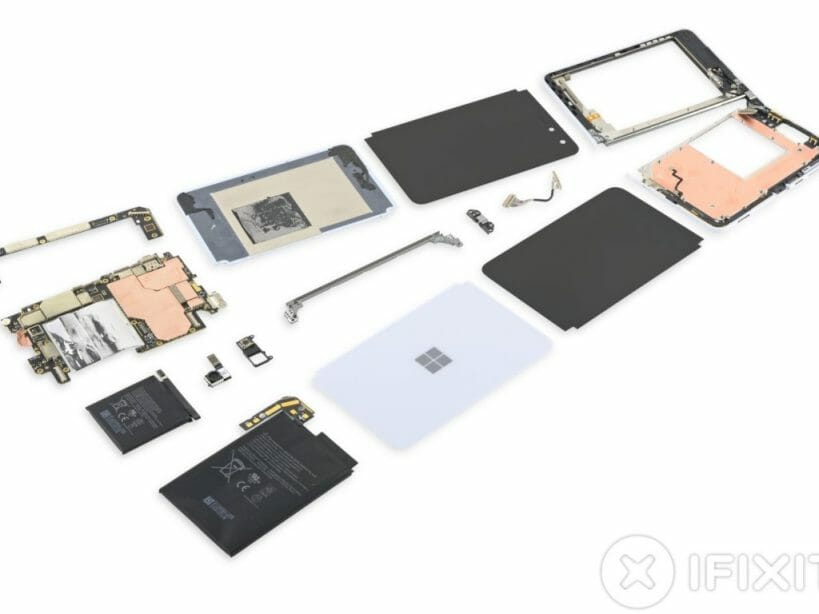 Some other interesting points in the detailed teardown reveal the Duo’s left battery resembling a mini iPad, and the right half being full with lots of circuitry. There’s also the multi-strand interconnected cables, too, which are routed through the hinges. Finally, there’s an interesting bit about the Duo’s geared hinges which iFixIt calls a “pretty simple hinge design compared to some of the other options we’ve seen.”

Indeed, it looks as though if you’re buying a Duo, there’s no chance that you’ll be able to repair it on your own if something goes wrong. The Duo might not be the “glued-filled monstrosity” that iFixit deemed the original Surface Laptop to be, but it still doesn’t look like something that’s easy for yourself or repair shops to replace. You should instead consider investing in the $200 Microsoft Complete Protection Plan at checkout, which covers accidental damage.