Microsoft partners with mapping companies HERE, TomTom and Esri to create the next “world graph”

Today at the at the Microsoft Technology Center in Detroit, Microsoft announced new and expanded partnerships with HERE, Esri, and TomTom, all which are aimed at creating the next “world graph.” The partnerships also come at a time when location is ever more essential to understanding the world around us, and as it has growing potential in transforming our lives, cities, and industries.

With the TomTom partnership, which is based on TomTom’s maps, traffic, and navigation software, TomTom has plans to integrate its own services to Azure in order to make it easier and flexible for developers to build and manage enterprise, mobile, and IoT applications which depend on location.  In a statement, Peggy Johnson, the EVP of Business Development at Microsoft expressed excitement for what the partnership with TomTom means for developers:

“Making TomTom’s services available through the Microsoft Azure cloud platform will allow developers and our customers to make location a core part of their cloud-based applications.”

Microsoft will also be extending their ongoing partnership with HERE, which already powers many services such as Bing, Cortana, Windows, and Office. Under the new agreement, Microsoft may use HERE data and services into productivity scenarios in cars.  In a similar statement, Ashish Pandya, the director of the corporate strategy for HERE also expressed thoughts on the expanded partnership:

“We are entering a new era of services around connected cars in terms of safety, in-car productivity and making journeys more efficient…We don’t think one single entity can do this by itself. It’s going to take a collaborative effort. We’re very pleased to expand the agreement we’ve had with Microsoft.” 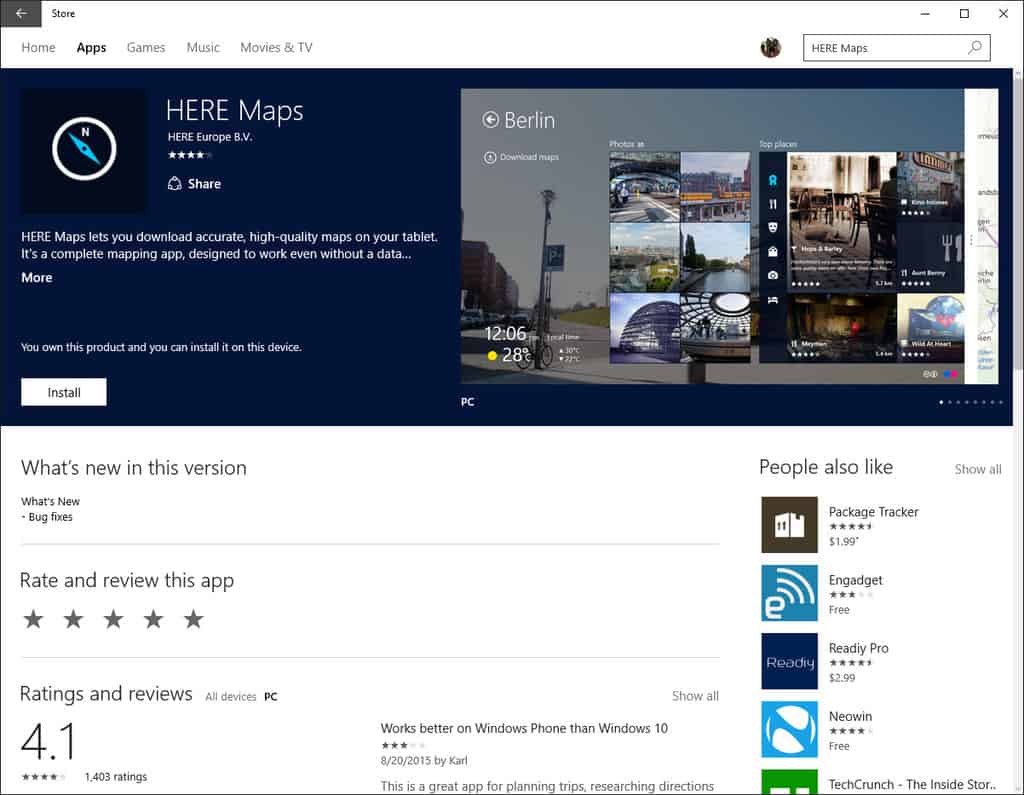 HERE MAPS in the Windows Store

Esri, which is a market leader in geographic information system (GIS) technology, is also another Microsoft mapping partner, and its ArcGIS products are already deeply integrated into many Microsoft applications and services. Esri’s GIS products run on Azure, and-and can ingest any real-time, location-based data,  and location services data from companies like HERE and TomTom. Microsoft has recently announced a preview of ArcGIS Maps for Power BI for compelling visualizations. Heather Blatchford, director of global alliances at Esri, reflected on the power of Microsoft Azure:

“Esri’s ArcGIS platform is turbocharged by Azure, and it’s the power and scalability of the performance of the cloud that starts to make transacting billions of observations, tens of thousands of images and millions of maps a reality.

According to Microsoft, with these three partners, the ultimate goal is to create a “World Graph,” which is a “new data index of physical places, objects and devices and their interconnectivity.”  Microsoft believes this will be the next big concept in graph technology, adding onto systems such as Bing’s knowledge graph, Facebook’s people graph and Microsoft Office’s and LinkedIn’s professional graph.

The software giant also envisions global location-based services for customers differentiated by an open platform, with large data sets and natively integrated functionality for developers, and deep integration with other data graphs for new scenarios. The company sees many uses for global-based location services and writes:

Scenarios could include connected cars that combine up-to-date mapping, traffic and weather data with a driver’s schedule, to-do lists and preferences for personalized planning and routing. Intelligent cars could re-route away from accidents, recommend nearby restaurants and find commutes with good cell coverage for work calls. To increase safety and efficiency, data from road conditions, car sensors and driver behavior can inform predictive car maintenance.

Today’s announcements are very interesting, and clearly show that Microsoft is very interested in using mapping to empower businesses, cities, and the world, to do more. Let us know your thoughts on this by dropping us a comment below!