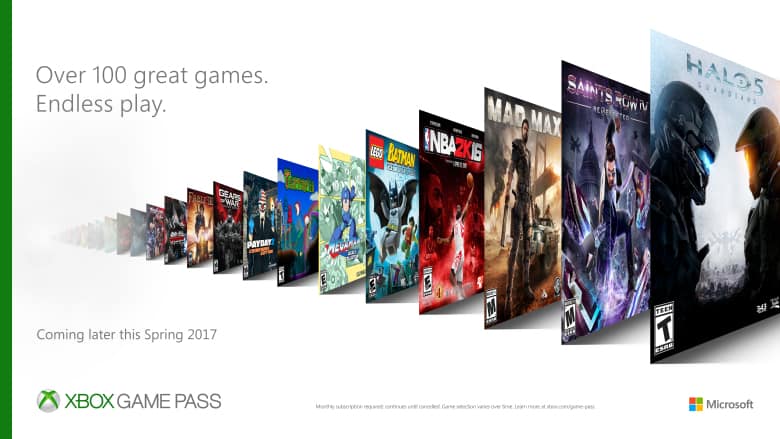 Microsoft today announced Xbox Game Pass, a new gaming subscription service coming later this spring, which will give Xbox fans access to 100 games for $9.99 a month. The announcement comes as the company prepares to launch Project Scorpio this holiday season, and marks a commitment to giving gamers the freedom to play the games they want, with the friends they want, and on the devices they want.

According to the announcement post, Xbox Game Pass will give gamers unlimited access to over 100 Xbox One and backward compatible Xbox 360 games for $9.99 per month. Games from industry leading publishers such as 2K, 505 Games, BANDAI NAMCO Entertainment, Capcom, Codemasters, Deep Silver, Focus Home Interactive, SEGA, Warner Bros. Interactive Entertainment and Microsoft Studios, will all be included in the service. Additionally, fan-favorite titles such as Halo 5: Guardians, Payday 2, NBA 2K16 and SoulCalibur II will also come to Xbox Game Pass once it launches to the Xbox community in late Spring of 2017.

It is also worth noting that with Xbox Game Pass, you can discover and download the full titles directly on your Xbox One. Unlike with Sony's PS Now streaming service, Xbox Game Pass will feature "continuous, full-fidelity gameplay" without the need to worry about connection or streaming issues. As an added bonus, Xbox One games in the catalog, and add-ons, will be available to purchase at an exclusive discount for Xbox Game Pass members. New games will also cycle into the subscription with some cycling out, giving you a constantly updating library of games. Phil Spencer described the importance and the rollout of the service, and writes:

It’s important to us that Xbox Game Pass provides an enjoyable and seamless experience. Before the program rolls out to the broader community later this spring, we’ll be testing Xbox Game Pass with select members of the Xbox Insider Program in the Alpha Preview ring, starting today with a very limited number of titles. The titles that are available in Preview are just a small glimpse at the expansive catalog of games that will be available when Xbox Game Pass launches late spring. Xbox Live Gold members will also be receiving exclusive access to Xbox Game Pass prior to the program launching to the broader community. We’ll have more details on timing closer to launch.

Are you excited to hear about Xbox Game Pass? Is Xbox Game Pass something that you think you will pay for in the future? Let us know your thoughts by dropping us a comment below.