If you’re waking up to a cup of coffee and the internet’s overall reaction to Microsoft’s E3 keynote announcements, you’re probably filled with mixed emotions. There were a lot of praises for the company’s move to purchase several studios for first-party game development while others rolled their eyes at the announcement of seemingly iterative rehashings of legacy intellectual properties (IP) for the Xbox.

One of those potential eye roll moments for some came during the announcement of Halo Infinite. The sixth installment in the Halo franchise (excluding tangential properties) was announced yesterday evening and to many, the reveal was rather lackluster, but for Microsoft, this latest addition to the iconic gaming universe is more of a first than an also-ran development story.

How many times does Master Chief have to save humanity? And at what we point do we wonder if this isn't all his fault?

For the first time in a long time, Halo is getting an under the hood upgrade to go along with its visual and thematic evolution. 343 Industries, the makers behind Halo 5: Guardians, are using what they call the Slipspace Engine for the development of Halo Infinite.

While there wasn’t much to show at the E3 from 343’s latest efforts, a demo of in-engine footage was released to highlight a modernized art style as well as ambitious performance boosts. 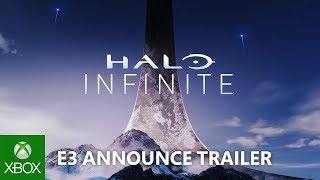 If you're waking up to a cup of coffee and the internet's overall reaction to Microsoft's E3 keynote announcements, you're probably filled with mixed emotions. There were a lot of praises for the company's move to purchase several studios for first-party game development while others rolled their ey

There are few details about the new engine coming from 343 industries, but the studio is in early talks about offering early flighting programs that will let members of the Halo community play the game while it’s in development. The upside to participating in the early flights come in the form of feedback, helping to shape the new Halo game and potentially the direction the series heads in, while also getting a sneak peek at the development process of one the most iconic gaming studios to-date.

In the future, you will be able to join early flighting programs that will let members of the community play the game with us, and give direct feedback, much like the current Insider flighting program for Halo: The Master Chief Collection. It will take some time for us to be ready to kick those flighting events off, but when we do they will start small and grow along the way.

For those interested, 343’s studio head, Chris Lee, is open to feedback via his Twitter handle, @tefferlee. Reaching out to Lee via Twitter appears to be one of the best ways to volunteer to be a part of the early flighting program until the studio establishes a more formal venue. When reaching out to him, we remind our readers to please be respectful of his efforts and time.