Microsoft’s goal of a billion active Windows 10 machines is heavily dependent on a few issues. Enterprise adoption is one of them, and the company is doing well in that regard with a significant percentage of businesses at least giving Windows 10 a try. Another major factor is new PCs sold with the new operating system already installed, as the company seems to have plateaued in terms of upgrades with over 350 million Windows 10 users.

According to Gartner, the news is mixed as to whether the PC market will move out of the doldrums it’s been in for the last few years, as the sale of new machines has failed to keep up with historical standards. In short, while North America shows some signs of recovery, the rest of the world remains in decline.

“One of the ongoing problems in the PC market has been the price hike in selected regions due to the weakening local currency against the U.S. dollar,” said Mikako Kitagawa, principal analyst at Gartner. “The price issue has impacted the EMEA and Latin America regions for the past year. However, PC shipment declines became rather modest in the second quarter compared with previous quarters, which suggests a fading currency impact.

Worldwide, Lenovo remains in the lead, with HP and Dell coming in closely behind. Overall, the global market declined by 5.2%. 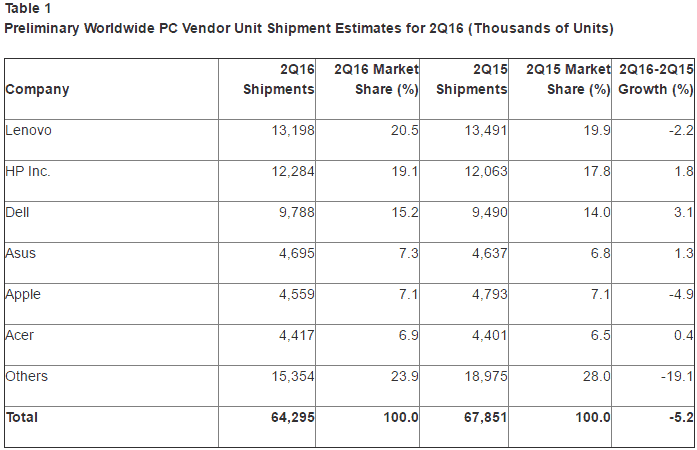 In the U.S., Dell and HP took the top spots with close to the same 27% market share, with Lenovo coming in third. The U.S. market showed 1.4% growth, which is anemic but still an improvement over the global market’s decline. 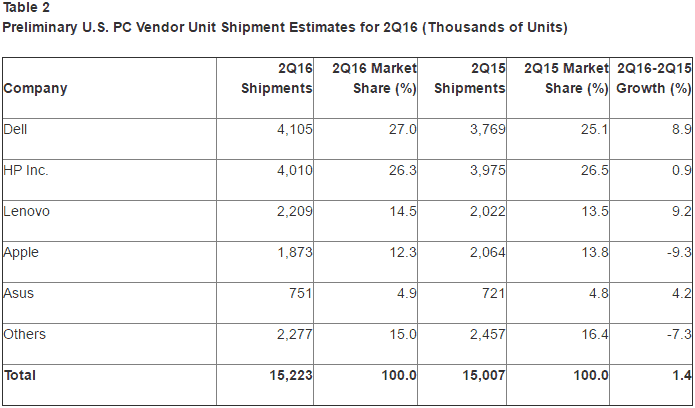 Looking forward, it appears that guarded optimism is the norm:

“While vendors and channels generally have more optimistic expectations of PC sales compared with the past, there is still a chance to have a potential inventory built. This will depend on how PC market demand picks up in the second half of this year for both the business and consumer segments,” Ms. Kitagawa said. “The second and third quarter are typically PC buying season for the U.S. public sectors. Positive second-quarter results could suggest healthy PC sales activities among the public sectors. There is an opportunity for a Windows 10 refresh among businesses, which we expect to see more toward the end of 2016 to the beginning of 2017.”

We’ll be keeping our eyes on the PC market numbers going forward, because it’s a rather important set of statistics in terms of Microsoft’s Windows 10 strategy. Let us know in the comments if you think the PC market will recover.