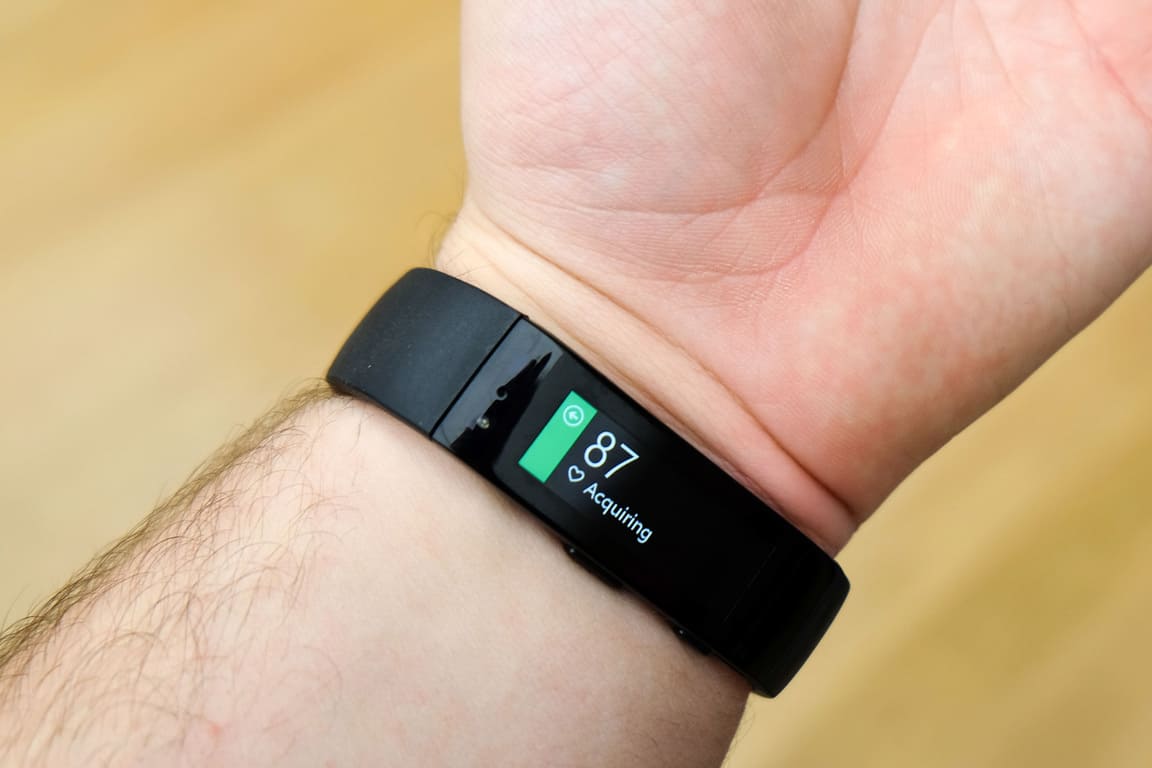 There has been a flurry of Microsoft products to get excited about in the second half of 2015. Windows 10 launched just over a month ago, Windows 10 Mobile is set to launch later this year, and rumors are circulating around a new Surface Pro and flagship Lumia phones. With all of these developments, news that there could be a second version of the Microsoft Band just around the corner has been crowded out. And considering the first Band was just a proof of concept device with a limited release, a new version of the Band has a lot of things it could improve on to make for a potentially incredible wearable.

The part fitness tracker, part smartwatch wearable from Microsoft was announced last October and comes with an impressive feature set. It can do everything from monitor your heart rate, track your sleep, keep score of your golf game, guide you through a workout, as well as give you a glimpse of your emails, calendar, and other notifications from your phone. It also was built platform agnostic, so it works with either Apple, Android, or Windows Phone, although there are more features if synced with a Windows Phone, like Cortana, voice commands, and text message replies.

I’ve enjoyed the functionality of my Band. Since wearing it regularly I keep upping my step goal and finding new ways to get out and about. I’ve also been able to use it to quickly reply to text messages with quickly available preset responses when I’m busy in a meeting or to dictate a response when my hands are full and cannot easily reach into my pocket. Swiping it to pay for Starbucks is a great convenience as well. The device’s capabilities continues to impress me and Microsoft has been committed to increasing its functionality with new tracking for bike rides and golf games.

But the Band does feel and look like a proof of concept project. Not because of any diminished functionality of the sensors and apps, or even the custom firmware created for the Band, but because of the materials and to an extent the shape and size of it as well. That’s why I was happy to hear Microsoft COO Kevin Turner confirm at the Worldwide Partner Conference earlier this summer that they are working on the next generation of their wearable.
If another Band is indeed on its way, and rumored to be announced alongside the Surface Pro 4 and the Lumia 950/950 XL this October, there are a few things that need to be addressed for the Band to finally be a full-fledge consumer product, and not just a show-case / experiment for the Microsoft Health platform.

The physical flaws.
The physical exterior has a feel that it was all just for show, not permanence. The clasp can fail, the rubber can wear, and the screen… well it’s safe to say it’s a safe business model to be selling screen protectors for the Band. And this isn’t just from my use of the Band but also two family members. All three of us have had to take the device into Microsoft at some point over the past 10+ months because of significant wear and tear issues. That said, every time we have brought a Band into Microsoft, at least they have been quick to take care of the issue and swap it out.

So what does Microsoft need to improve to make it a full fledge consumer product?

The screen – Possibly the biggest room for improvement is the screen. It scratches far too easily and quickly becomes a marred and unattractive display. I always have a screen protector, but once, when waiting for a replacement protector to be delivered, I went without it for two days. In just those two days, noticeable and permanent scratches appeared all over the screen. Screen protectors are a simple solution to this but they can also be their own eye sore, especially if the edges ever start to peel off. It is one more thing to worry about, one thing you don’t have to worry about nearly as much with competing devices.

The skin – The rubbery exterior of the ‘band’ portion of the Band (everything that isn’t the display piece) starts to fade and rub off sooner than you think. It hasn’t been a problem with my Band, and it still fits comfortably on me. But it doesn’t look great. And one close family member had the rubber on the inside complete fade away exposing the inner case to what seem to be the batteries.

The charger – On both my and my wife’s Bands, the metal surrounding where the charger magnetically attaches becomes scratched, possibly due to the metal pins on the end of the charger itself. On mine it has never been an issue because you never see it. But for my wife it eventually caused skin irritation. This happened after only having her Band for three months. We took it in and Microsoft replaced it quickly without any questions. And despite the uncomfortable shortcoming, my wife still prefers the Band even though she has an iPhone and everything else Apple.

What is good but could be improved.
The battery – sure it doesn’t last a week like a FitBit, but its energy needs are certainly greater than a FitBit since it uses a full color touchscreen. The battery also lasts longer than an Apple Watch, and it charges very quickly. I never have to keep it attached to the charger for longer than 30 minutes as I can always just slip it off when I’m getting ready in the morning. It would be nice if it could charge wirelessly on the same Qi charging pad for a Lumia, circumventing the contact problem described above.

The look – While I don’t find the overall aesthetic (at least how it looks out of the box before wear and tear) unattractive, it certainly doesn’t make a stunning first impression. One critique I’ve heard from reviewers that it resembles a prison bracelet. Definitely improving the rubber exterior, maybe giving some personalization options with colors, could change that. The greatest way to combat the ‘prison bracelet’ appearance though is to slim it down to be more in line with the standard for wearables size.

The screen – One slight detraction from the look of it too is that the screen’s prominent size does give the Band one odd flat side while the rest is curved. A curved screen could significantly reduce that look and give it less of a bulky profile. The pitfall of this design decision though is if a curved display pushes the price point above $199. If it did, then the Band could really be put into in a whole new category of direct competition with premium smartwatches like the Apple Watch and Android devices, and not just fitness trackers.

More Windows Phone (Windows 10 Mobile) integration – The firmware has proven to be extremely functional for such a small display both with native apps that come installed and third party apps thanks to Microsoft providing a SDK for the Band on all platforms. But there is still a little room for some improvement. It would be nice if I could control Groove Music through the Band and see other more native Windows Phone/Windows 10 Mobile integrations.

From a philosophical point of view of the new One Microsoft, it seems like a no-brainer to put Windows 10 IoT Core, or some customized version of Windows 10 into the firmware so there is more integration. But the demand on resources might be too much for such a small device so I don’t have my hopes up for a version of Windows 10 on the Band 2. It just would be nice if there is a clearer path and tighter integration into Windows 10 Mobile.

After selling out multiple times within hours of being available, the concept of the Band is proven. It may have been a proof of concept for Microsoft’s Health platform and sensors, but it turned out to be proof of the concept that Microsoft can make a smart wearable.  The Microsoft Band is differentiated enough from the competition, fun to use, and easy to use regardless of what brand phone you pair it with.

If Microsoft is going to commit to the future of this line of product though, the next version needs to be a full fledge consumer product, not just an experimental device. It needs a little more style, a little more personalization, and more durable components. It is an activity tracker, so the consumer shouldn’t have to worry about what activity could do to wear and tear after a few months of use. With attention to these points, combined with the already impressive functionality of the device and the quality of the sensors, the sequel to the Microsoft Band could stand out in an increasingly crowded marketplace of wearables.

What do you like about the current Microsoft Band? What do you think could be improved? What new features do you hope come to the next version of the Band? Let us know in the comments section below.