Windows 10 Redstone: “Pick up where I left off” app syncing between devices

I have already written about Continuum improvements coming to Redstone in the past, but more details regarding app syncing between devices is now coming to light. According to my sources who are familiar with the matter, upcoming improvements to Continuum will introduce “OS X Handoff” like functionality, allowing users to sync apps between devices for working on the go.

I have already touched on this feature in previous reports, but now I know much more about what we can expect to see surrounding the feature. In short, it works exactly like Handoff does between iOS and OS X. A Windows 10 user can open a word document on their desktop, begin typing away and then realise they need to get going to work. They can simply leave their desk, open up word on their phone and then be prompted to “pick up where I left off”, allowing the user to jump directly back into working.

If the user is unaware they can do this, Cortana will helpfully inform you that you can resume working on a document or email once you’re away from your desk, making it far easier to access your workflow. This feature should work in more than just productivity apps too; For example, when using the Maps app, you can look up directions on your PC before leaving the house, and then pull up the Maps app on your phone once out and about and resume exactly where you left off on your PC. 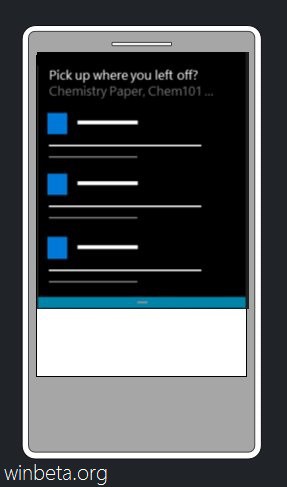 This works both ways too, you can be writing an email on your phone and then resume it on your desktop, or you can be browsing the web on your desktop and resume it on your phone. As I said, this feature is heavily inspired by Apple’s Handoff mode, but that isn’t a bad thing. I’m super excited to see this feature coming to Windows 10, and will be using it extensively between my Windows 10 desktop, tablet and phone.

It is still unknown whether Microsoft will brand this functionality under Continuum, or call it “pick up where I left off” officially. I’m sure we’ll find out soon enough. The company will talk more about new Redstone features at its BUILD developer conference tomorrow, hopefully outlining this feature as well as many others. Until then, what are you most looking forward to in Redstone? Let us know below!