It’s been almost two months since Microsoft started rolling out the Windows 10 April 2018 update, and the company has just announced that it’s now fully available for all compatible devices. According to Redmond, over 250 million PCs are already running the April 2018 update, which represents the fastest rollout in the history of Windows 10.

In case you forgot, 250 millions PCs represents roughly 35% of the 700 million active Windows 10 devices out there. As expected, this number is much lower than AdDuplex’s recent 50% number, and that’s because the cross-promotion network for Microsoft Store apps only takes into account PCs where apps using the company’s SDK are being used. Still, 35% of the user base is pretty good after less than two months, and this number should grow pretty quickly now that the major update is generally available.

“Artificial Intelligence continues to be a key area of investment for Microsoft, and we’re pleased to announce that for the first time we’ve leveraged AI at scale to greatly improve the quality and reliability of the Windows 10 April 2018 Update rollout,” explained John Cable, Director of Program Management, Windows Servicing and Delivery. The exec also says the company is seeing “higher satisfaction numbers, fewer known issues, and lower support call volumes compared to previous Windows 10 releases,” which is honestly a bit surprising. 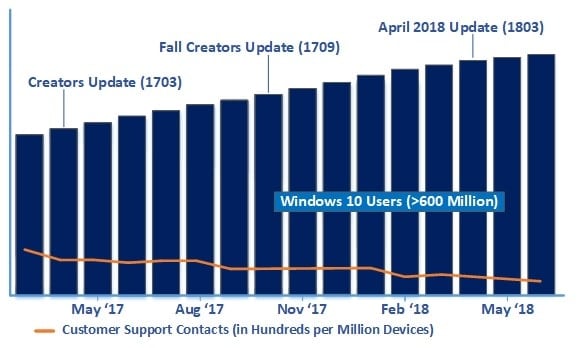 Indeed, you may remember that the road towards the release of the April 2018 update was quite a bumpy one, with the major release starting to roll out on the last day of April. After its release, several issues surfaced including File Explorer crashes, BSOD when updating as well as installation problems with Intel SSDs. Microsoft has since released several patches to fix these bugs, and this month’s Patch Tuesday also addressed brightness controls issues on select laptops.

“Early data shows the quality of the April 2018 Update exceeding earlier versions of Windows 10 in both reliability and performance,” said Cable. “Of course, this work is never done, and we continue to partner to with our hardware and software partners to drive additional performance and reliability improvements in Windows 10,” he continued. Do you agree with Microsoft’s telemetry data, and do you think the April 2018 update has been less problematic than previous major releases? Sound off in the comments below.