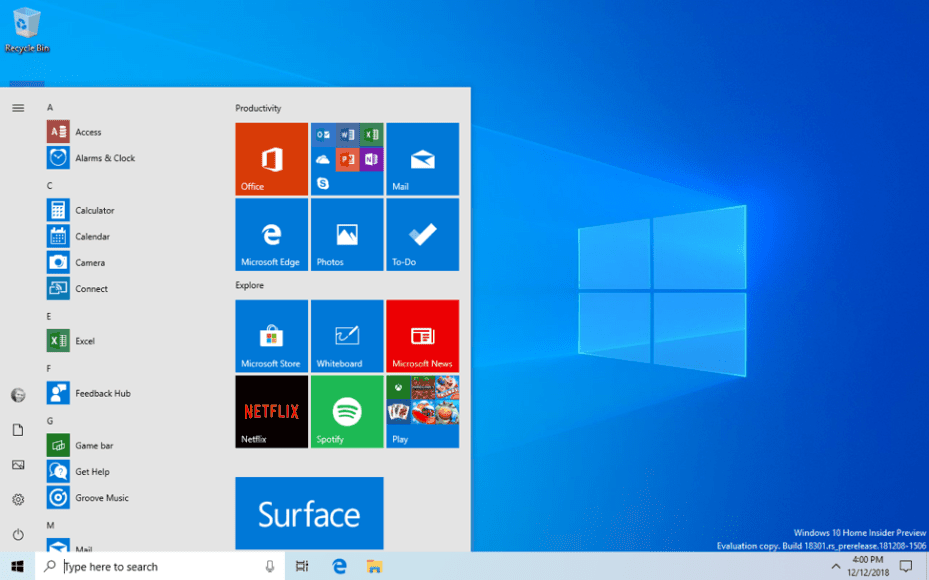 Despite Microsoft announcing that the Windows 10 May 2019 would come with a “simplified Start layout” for new devices and clean installs, Microsoft hasn’t completely given up on preinstalling apps like Candy Crush or Netflix. After Microsoft released new ISOs for the May 2019 Update on MSDN, some users have shared their different Start Menu after doing a clean install (via AskWoody), and regarding bloatware it seems like your mileage may vary.

As noticed by Tero Alhonen, the Start Menu will change depending on the user opting for a Local Account or a Microsoft Account during the out of box experience. Users choosing a local account will get apps like Netflix, Sptoify and Adobe Photoshop Elements preinstalled, while those choosing a Microsoft account will get many casual games being pinned on their start menu.

It looks like having Windows 10 Home or Pro doesn’t matter, as all users options for a Microsoft account during setup will get games like Candy crush on their Start Menu. In a reply to one of Term Alhonen’s tweets, Michael Niehaus, Principal Program Manager, EMX, modern deployment team at Microsoft said that “Targeted apps can vary by region.”

While we didn’t try this on our own machines, there’s apparently a trick to get a clean Start Menu with no games when doing a clean install: you’ll need to choose “Continue with limited setup” during the out of box experience, so that Windows 10 won’t connect to the Internet to download those superfluous apps.

Still not sure (when installing Windows) why MSA gets games on Start but local account doesn't. One thing has been presistent, no matter what edition - Home, Pro, Edu or Enterprise - if I do a "limited setup" ie without network the Start menu always ends up gameless. pic.twitter.com/Rh1I03rzWb

In the end, Microsoft did clean up the Start Menu in the Windows 10 May 2019 update a little bit with a single column design with reduced top-level tiles, but you'll still get a fair amount of preinstalled apps. Of course, if you just update from a previous version of Windows 10, be assured that Microsoft will let your Start Menu just as it is.

Microsoft is working on an "open design" philosophy, but there's still a long way to go

Microsoft partners with Dell to bring VMWare to Azure