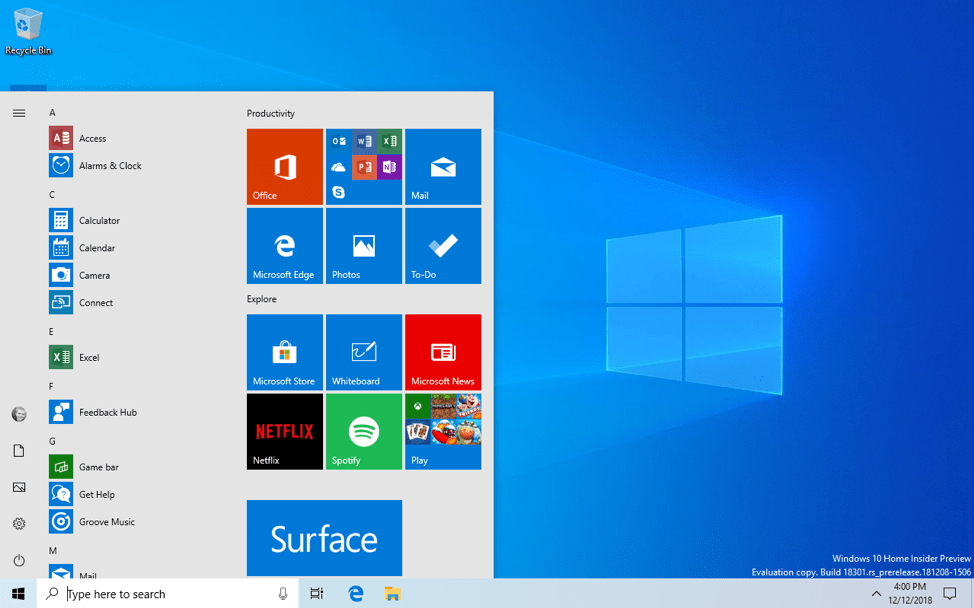 The Windows 10 19H1 build 18305 is now available for Windows Insiders in the Fast Ring, and what is the last build for this year is a pretty big one. The Windows Sandbox feature we wrote about this morning is here, but there are a lot of other interesting new features as well.

And with the 18305 build release to the Fast ring for #WindowsInsiders, we bring flighting to a close for 2018. Lots of exciting things to come in the new year!https://t.co/M8DCSpocTf

As you can see in the feature image above, this new build introduces a simplified Start layout with a single column design and reduced top-level tiles. This will only show up for clean installs or new user accounts, and you can see that Microsoft finally removed all the “bloatware” that included UWP games and other apps you probably don’t need.

In addition to Windows Sandbox, this new build also introduces some Windows Security app improvements such as a new Tamper Protection setting for the Windows Defender Antivirus, as well as a new Protection History experience. “The new Protection History experience still shows you detections by Windows Defender Antivirus, but it’s now updated to also give more detailed and easier to understand information about threats and available actions,” Microsoft explained.

After listening to Insider feedback, Microsoft is also changing how Clipboard history looks in this build with a more compact UI. “We are now optimizing the design for text snippets – shrinking the height of each entry and thus giving you access to more entries without needing to scroll the view,” the blog post reads.

Microsoft wants to make it easier for you to sign in to your PC, and this build let you do so with password-less Microsoft accounts. If you already have a phone number associated to your Microsoft account, you can now sign to your PC by receiving an SMS message. Once your phone number account is configured on your PC, you can also use Windows Hello or a PIN to sign in to Windows 10.

In case your forgot your PIN, this build also brings a simplified Windows Hello PIN reset experience that looks just like the web experience. For now, this PIN reset experience is only available for Windows Insiders using Windows 10 Home, but Microsoft says it’s coming soon to more editions.

Other highlights in this build include a revamped Settings homepage with the new header we noticed earlier, the ability to set Set a default Task Manager tab. There’s also a new default date format in File Explorer called Friendly Dates. “The new format simplifies the date modified column, and provides consistency with other views that you see throughout the OS, apps, and on the web,” Microsoft explained, though be aware that only a subset of Insiders will see this change for now.

Lastly, Fast Ring Insiders can now test a new Office app for Windows 10 that is apparently a PWA for the office.com website. This app will replace the existing My Office app over the coming months, the company said today.

This latest 19H1 build also brings a lots of other fixes and general improvements, and you can learn more in our separate post. Microsoft didn't disappoint with the last Insider build for the year, but as usual let us know in the comments if you encounter any issues after installing the new bits.

Microsoft rumored to be pursuing another acquisition, this time Israeli server maker Mellanox