Satya Nadella: 'What is unique about our Windows phones is this Continuum feature' - OnMSFT.com Skip to content
We're hedging our bets! You can now follow OnMSFT.com on Mastadon or Tumblr! 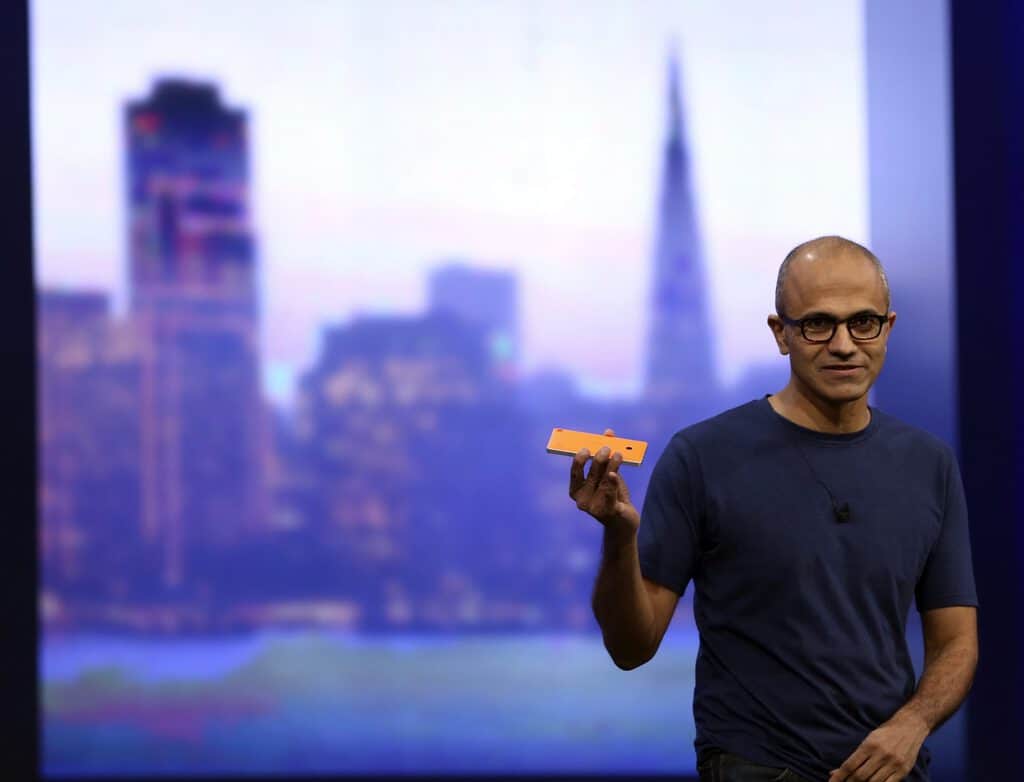 As Microsoft annual Build Developer conference is now behind us, Microsoft CEO Satya Nadella has given an extended interview to our colleagues at Business Insider that give us more insight on Microsoft's "mobile first, cloud first" strategy. We encourage you the read the full interview, but the most interesting thing that Nadella may have said may be what he thinks of Windows phone right now.

If you previously followed our Build 2016 coverage, you may have seen that Windows phones were barely mentioned during Microsoft's introducing keynote. This was not totally surprising though as we already knew that Microsoft has massively retrenched in mobile since the write-off of the $7.6 billion dollar Nokia acquisition last July. However, we reported last week that two Microsoft execs explained in interviews during Build that if Windows phones were clearly not a focus in 2016, Microsoft was still not "giving up" on mobile. If you still have doubts about Microsoft commitments to its own mobile division, here is how Satya Nadella answered Business Insider when asked what does Microsoft get by continuing to have and develop a mobile platform:

First of all, I don't think of Windows for mobile differently than Windows for HoloLens, or Windows for Xbox now. We have only one Windows. We don't have multiple Windows. They run across multiple form factors, but it's one developer platform, one store, one toolchain for developers. And you adapt it for different screen sizes and different input and output.

But what we get....I'm not trying to be another phone guy with the other person's rules. What is unique about our phones is this Continuum feature. If anything we will want to continue to build that capability out. Just like how with Surface we were able to create a category. Three years ago most people would have said: "what is a two-in-one"? And now even Apple has a two-in-one. And so three years from now, I hope that people will look and say, "Oh wow, that's right, this is a phone that can also be a PC."

Take emerging markets. India for sure is a mobile-first country. But I don't think it will be a mobile-only country for all time. An emerging market will have more computing in their lives, not less computing, as there is more GDP and there is more need. As they grow they will also want computers that grow from their phone. What's the most logical thing? I would claim it's a Continuum phone, which means that it can have other forms of input beyond touch.

So, there are three ideas here: first, Windows 10 Mobile and Windows phones are part of the Windows 10 ecosystem, and if Microsoft wants this ecosystem (and the new Windows 10 Store) to thrive then Microsoft has to commit to different devices, screen sizes and form factors. Microsoft would clearly not be able to convince developers to build Universal Windows 10 apps if the company was not committed to the phone form factor.

Nadella is saying that the Continuum feature which allows Windows phones to connect to a monitor, keyboard, and mouse and transform into a computer is still an exclusive. True, Continuum is currently restricted to premium devices with an SoC that is able to handle two screens, but it probably won't be long before mid-range Windows phones get access to it. And if we believe what we've seen during a Continuum for Phone session at Build 2016, the upcoming Windows 10 anniversary update will bring many new Continuum features. Windows 10 users can look forward to features such as casting a Windows 10 Mobile device screen to any Windows 10 PC, access to Win32 apps to through Remote Desktop and Azure Remote app and support for the Xbox One controller. We don't know yet, if any of these features could be Windows 10 Mobile real killer app, but the future of Continuum feels really exciting.

Last, Nadella may be right to focus on emerging markets and mobile-first countries, as Continuum phones may not be as interesting for someone who already owns a laptop or a hybrid tablet. But, what if your phone could become a true PC replacement, and the only computer you would ever need? Continuum seems like a disruptive concept, and that may well be the purpose of Windows 10 Mobile going forward: trying to change the rules of a game that Microsoft has kept losing for a few years.

In a year, Edge has had no zero-day exploits, and no known exploits targeting it