No phones? no problem: Microsoft stocks trading at all time highs - OnMSFT.com Skip to content
We're hedging our bets! You can now follow OnMSFT.com on Mastadon or Tumblr! 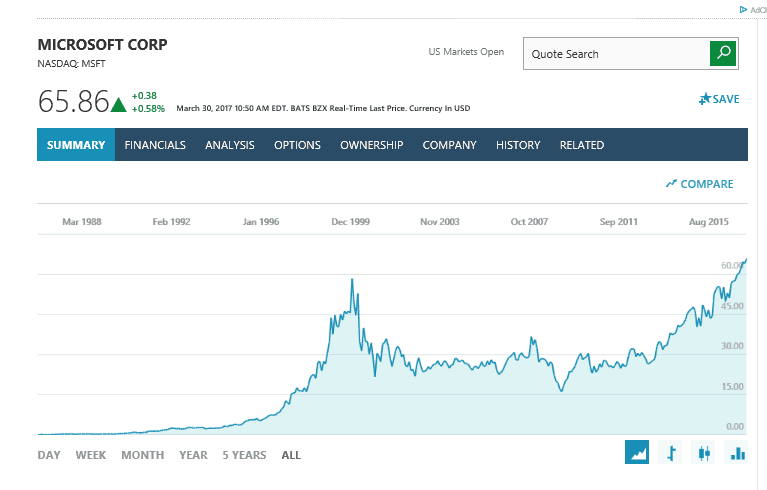 Over the last twenty years, Microsoft has gradually been recovering in the stock market. Today, Microsoft is up nearly .40 cents with a rise of 0.20, and trading at its highest levels ever (currently at $65.90), according to MSN Money.

What exactly has investors so happy with Microsoft right now? While there aren't any reports indicating exactly why, it's safe to surmise that the Windows 10 Creators Update has been stirring up the pot. With the April 11 due date less than two weeks away, the big update for Windows 10 is drawing a lot of attention, particularly in enterprise where investors are bound to see the largest profits.

Does this mean that consumers are over the declining Windows Phone? Not necessarily. What it does mean is that investors appear to be. It's no secret that Microsoft arrived in the mobile market a bit late. Even with their line of products and exclusive features, the Windows Phones never took off to the extent of iOS and Android. So when the company began to let it slide to focus on other areas, the outcry by current consumers was almost deafening.

This doesn't mean that Microsoft is dropping Windows Phones altogether. At a shareholder meeting a few months ago, Nadella teased that the company wanted to make their "ultimate mobile device" stand out beyond that of what was already available. But the promise of mobile given its current state isn't likely the reason people decide to invest.

For now, the shift seems to be working out well for Microsoft when it comes to finances. Investors are pushing for more enterprise involvement and in turn, praising the tech giant for the difficult decision. From Azure to the IoT connected cars, Microsoft technology is branching out into areas that investors are fond of.

Latest HP Elite x3 bundle could save you almost $200