There’s no doubt that HoloLens is one of the more interesting members of the Windows 10 platform family. While every other Windows 10 platform member displays information on a 2D screen (or perhaps no screen, as with many IoT applications), HoloLens displays its information in an immersive 3D space. That makes developing HoloLens applications a bit more complex than the typical Windows 10 project, and Microsoft has some suggestions over at the Windows blog as to the best practices for building apps for HoloLens.

Of course, Microsoft is doing its part to generate a strong HoloLens ecosystem. They’ve been giving out development funds to academics, as well as soliciting ideas from the general HoloLens community. So far, according to the company, the latter effort has been paying dividends, with scads of new ideas pouring in over just the last couple of days.

Microsoft stresses that any app developed via the Universal Windows Platform can be made to run on HoloLens, but that doesn’t mean the environment is precisely the same. Microsoft recognizes that developing strong HoloLens solutions will require some different thinking:

With HoloLens you can both develop 3D content and see that 3D content in the world around you. Apps targeting the features of HoloLens take advantage of volume, environment and human interaction. These apps are no longer confined to a two-dimensional plane. You can bring the solar system into your living room, you can see a mime run across a piano or create holographic greeting cards and share those experiences through mixed reality capture. Ideas like the Animated Storybook take advantage of placing holographic content into the real world, letting you walk around it and see everything with full volume.

In all likelihood, developing HoloLens apps will also require different team members, and Microsoft highlighted the team that will produce the winning app in their Share Your Idea project:

The blog post uses the example of HoloChess, which will require additional work to turn the typical 2D (or even on-screen 3D) chess implementation into a good augmented reality experience. Just intuitively, it’s clear that creating a chess game that can be manipulated in a fully 3D environment will require additional artwork and attention to detail that typical chess games don’t require. 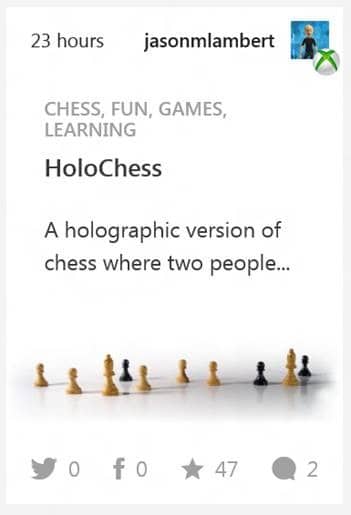 It’s a short piece full of generalities, but the post does highlight just how much more complex the process will be of creating truly immersive, compelling HoloLens applications. We’re chomping at the bit to see how HoloLens develops over the years, and are certainly happy to see Microsoft focusing on the skills and teams necessary to turn HoloLens into a real-world solution.