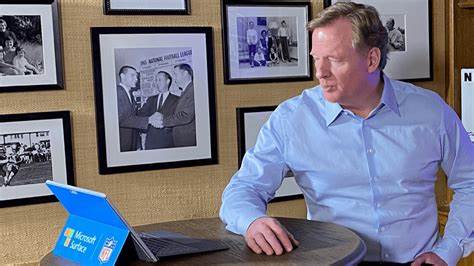 Microsoft and the NFL have a collaborative relationship involving the use of the company’s flagship Surface Pro tablet computer, on and off the field and amid a global pandemic, the two are expanding their partnership even further.

Earlier this year, Microsoft and the NBA partnered to bring fans courtside via Teams in a new effort to facilitate a more immersive gameday experience for the league. With the use of Microsoft Teams, players were given a virtual audience, and fans were given a taste of the often-elusive courtside seat.

Microsoft just announced an expansion to its current NFL collaboration that will now include the use of Teams on a more long-term basis for new fan experiences such as the Fan Mosaic, the Bud Light Showtime cam, and back-of-the-house operations.

For each game, the home team will invite lucky fans to a virtual VIP experience in which they watch the game together via a Microsoft Teams’ meeting. These fans will see a dual-screen display of the live game next to a Gallery View of fellow fans. Each fan video feed will be isolated and mixed into the Fan Mosaic display. Fan audio from the Teams meeting will be mixed with augmented crowd noise customized for each stadium.

Microsoft and the NFL will also make use of Teams technology to host the Bud Light Showtime cam.

After a player scores a touchdown, they will see fans from the Fan Mosaic appear on LED screens installed at each end zone, allowing them to connect and celebrate the moment.

Front-of-the-house operations aren’t the only section getting a Teams facelift during the new pandemic-inspired NFL season, NFL operations will also make use of new technology to help run the season.

NFL Football Operations will reduce the number of representatives onsite at each game. It will use Microsoft Teams to virtually manage operations for all games every week, supporting communication to gameday staff before, during, and after the game, and helping with document collaboration, reporting, and adherence to League and gameday protocols.

As for the flagship deal, Microsoft and the NFL will continue their hardware partnership and players and organizational personnel will be supported with various company solutions.

As of now, the Surface deal has expanded into support for playbooks, Sideline Viewing Systems, analytics, and tracking tools as well as an IT solution with over 2,000 devices and 170 Windows Servers deployed across 30 NFL stadiums.