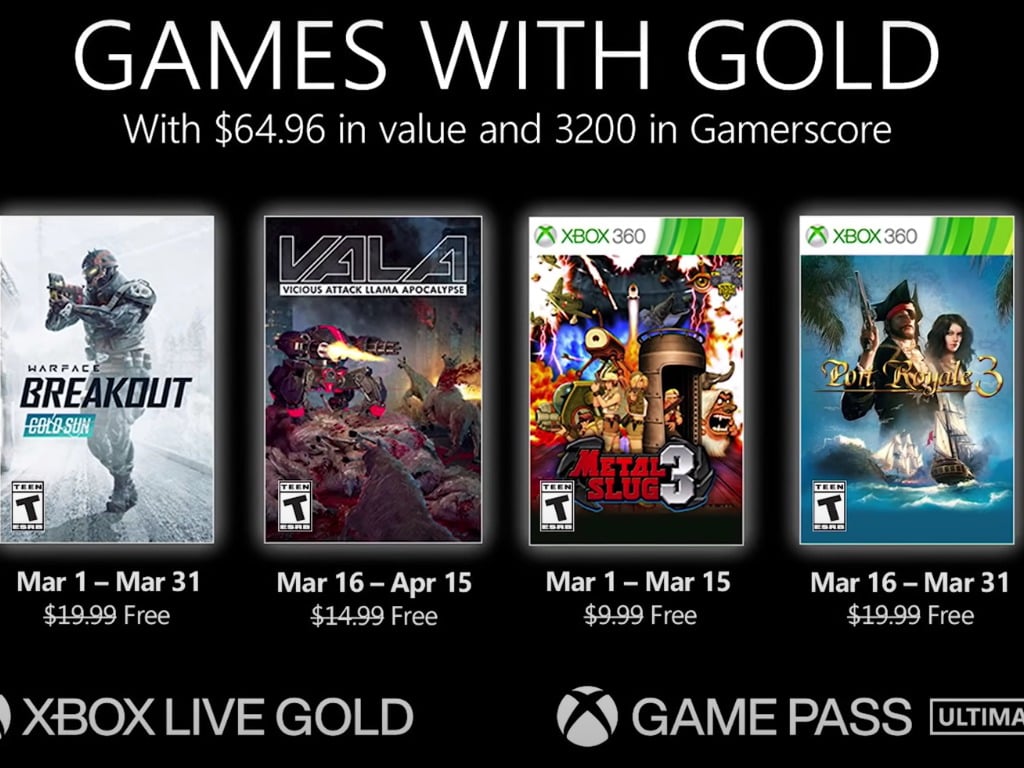 Microsoft has announced March's Games with Gold titles, and it's a pretty good selection of titles this month. The list includes Warface: Breakout and Vicious Attack Llama Apocalypse on Xbox One and Xbox Series X|S. On Xbox 360, meanwhile, the titles include Metal Slug 3 and Port Royale 3.

As a reminder, Xbox Live Gold members have access to these four titles, as well as Xbox Game Pass Ultimate Members. Anyway, have a look below for everything you need to know about these four titles. They add up to about $65 in value, which is not too bad over last month's $69 value.

Prepare your thumbs for a frantic top-down, couch co-op, twin-stick shooter like no other. Remotely pilot an endless supply of mechs to fight through the vast llama horde apocalypse. Featuring 1 to 4 player co-op, a massive, changing city to explore, and Xbox Play Anywhere functionality including on your PC, take down the Llamanati and pray that Llamazon blesses you!

Marco and Tarma of the Peregrine Falcon Strike Force are back to take down General Morden’s rebel forces. Run, gun, slice, and camel your way through an onslaught of adversaries, from soldiers to giant enemy crabs. Pilot a wide array of Metal Slug vehicles, shoot a variety of weapons, and cause mass destruction in this legendary run-and-gun shooter.

It’s the turbulent 17th Century, and you are a young sea captain whose only goal is to be the most powerful man in the New World. To achieve your goal, either choose to be a trader – developing trade routes to earn fortune, glory, and power; or become an adventurer – plundering, invading, and leading your ships in beautiful 3D naval battles. Set sail on 16 different ships, from versatile frigates to powerful galleons, and build your empire in the Caribbean.

There's still some time left in this month of February, so you can grab both Crazy Taxi, as well as Shadow Warrior before February 28. And, if you're not subscribed to Xbox Live Gold, you can grab a subscription directly from Microsoft here.

Getting started with LinkedIn Part 2 - for students