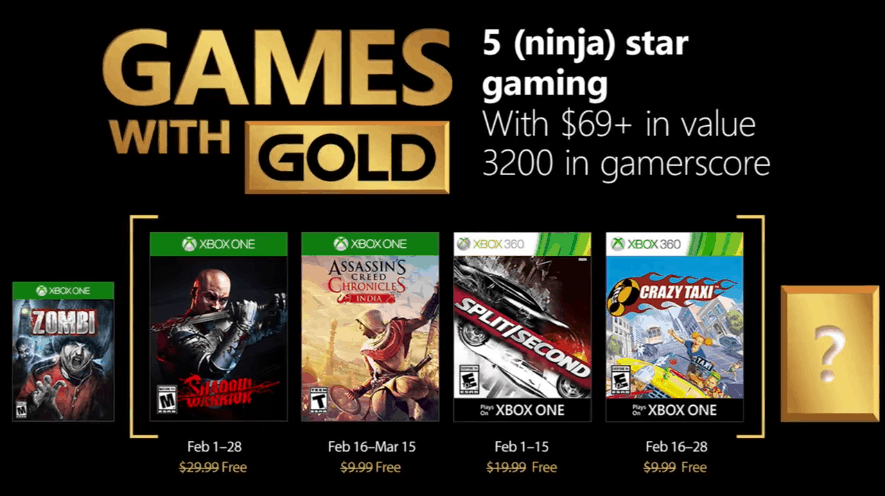 The Xbox team has just announced February’s Games with Gold titles, and the upcoming lineup of free Xbox One and Xbox 360 games looks pretty good. On February 1, the gory FPS Shadow Warrior will be available to download on the Xbox One, in addition to the arcade racing game Split/Second. Then on February 16, you'll be able to snag the 2.5D side scrolling platformer Assassin's Creed Chronicles: India and the score attack game Crazy Taxi.

These four titles represent $69 in value, which is similar to what we had with this month's Games with Gold titles. You can find more details about these games below:

Shadow Warrior tells the offbeat tale of Zilla Enterprise’s corporate shogun Lo Wang as he is ordered to acquire a legendary blade of limitless power by his deceitful employer. Betrayed and left for dead, Lo Wang learns of the blade’s connection to ancient gods from another realm preparing to push our world to the brink of destruction. Now the reluctant hero must become legend through a masterful combination of gun, blade, magic and wit to uncover the truth behind the demonic invasion and banish evil back into the darkness.

Embody Arbaaz in his quest for retribution through a colourful depiction of 19th century Colonial India in 2.5D stealth gameplay. Zip-line across the streets of Amritsar, hide in the shadows of the palace, and hunt legendary artifacts, following in the footsteps of Alexander the Great.

Split/Second is an intense arcade racing game set within the universe of a mega-budget, prime-time reality TV show. Contestants race to be the 1st across the finish line in a made-for-TV city built for destruction, with the ultimate goal of becoming the season champion.

Hey hey, come on over and have some fun with Crrrrrazy Taxi! Barrel through traffic packed streets, hurdle off parking garages, and Crazy Combo your way to Crazy Money in a wild frantic race to scare up the most fares. In Crazy Taxi, time is money, and only the Craziest Cabbies come out victorious.

If you haven't done it yet, we remind you that you have until the end of the month to grab The Incredible Adventures of Van Helsing III and Army of Two for free. Let us know in the comments if you're satisfied with the Games with Gold titles for February.