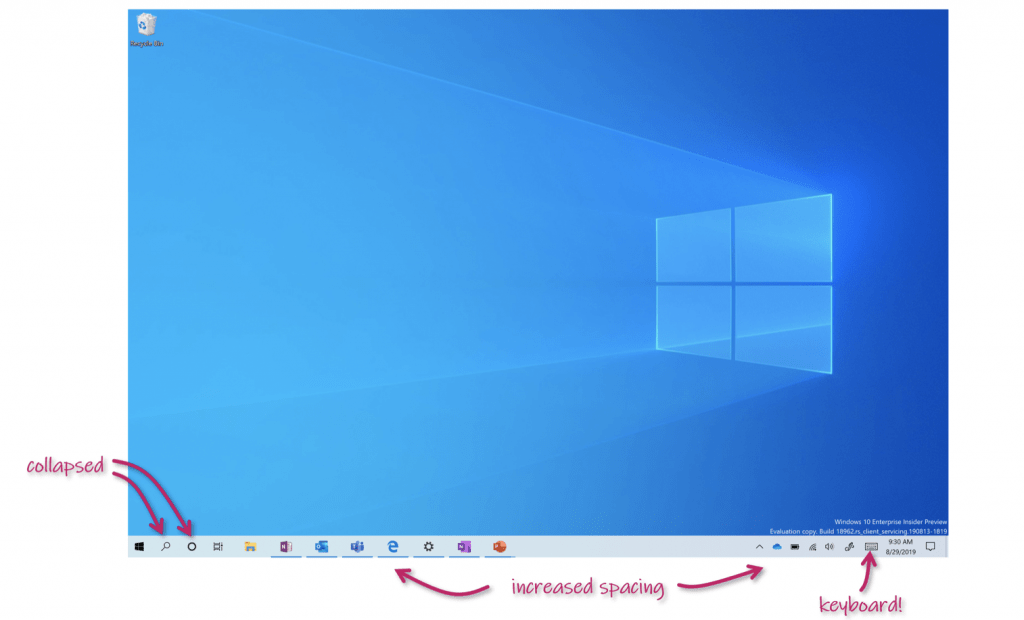 Microsoft has just announced the release of Windows 10 preview build 19592.1001 for Fast Ring Insiders, which is the first Insider flight under the new leadership from Microsoft veteran Amanda Langowski. Starting with this new build, Microsoft is testing again the new tablet experience for 2-in-1 PCs that was first introduced in the 20H1 build 18970 back in August 2019, before disappearing later in the build 19013.

"After some refinement, we’re reintroducing it to Windows Insiders in this build and plan to deliver this experience to customers in a future Windows 10 update,” the Windows Insider team said today. To be clear, this new tablet experience is not a replacement for the existing Windows 10 Tablet Mode. Instead, Microsoft is working on improving the regular desktop mode for users with 2-in-1 PCs entering tablet posture.

The minor changes in this new tablet experience for 2-in-1s include a collapsed search icon on the bottom left corner, increased spacing between Taskbar icons, more padding for File Explorer elements, as well as a touch keyboard that auto invokes when you tap a text field.

Please note that this new tablet posture improvements will be rolling out gradually, starting with select Insiders that have never detached their keyboard before, or have their tablet mode settings set to Don’t ask me and don’t switch. The Windows Insider team added that it will also possible to customize the experience by going to checking Tablet settings in Settings > System.

In addition to these tablet posture improvements for 2-in-1 PCs, the build 19592 also improves the Windows Search Platform Indexer to make it more efficient, and there are also bug fixes for Windows Update, the Settings app, the Windows 10 taskbar, and more. You can check out the full list of fixes and known issues below:

It's not clear yet if the tablet imposture improvements for 2-in-1s will ship with the next feature update coming after 20H1, but the Windows Insider team does want to hear about your experience when you use touch input on your 2-in-1 tablet without going into Tablet Mode. Again, the latter is here to stay, this is all about improving the desktop experience on Windows 10 for tablet users.