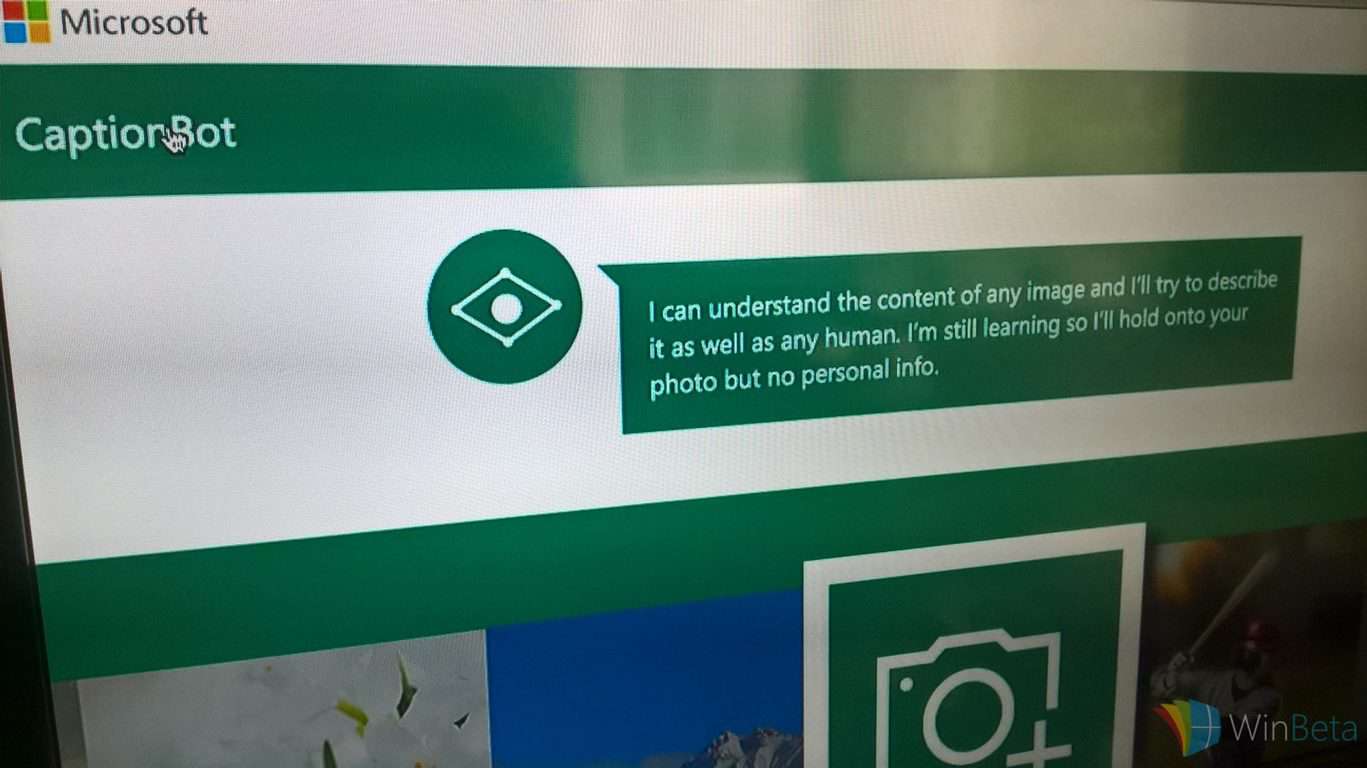 Just a few weeks after Microsoft's Tay chatbot was taken down after sending out offensive, racist and nonsensical tweets, a new AI experiment from the Redmond giant is making headlines today, and some Internet users are making fun of the picture-recognizing bot's ability to successfully identify images. Following the bad buzz around Tay, a report from The Guardian explains today that "the internet has also wasted no time testing the limits of the technology - uploading pictures of Hitler to see whether they can make CaptionBot racist, or making it the butt of some pretty good jokes."

CaptionBot is actually the latest online tool to be released by Microsoft's Cognitive Services, a team of engineers who are leveraging on machine-based AI to "give your apps a human side". The team previously released other bots such as CelebsLike.me which tried to match your picture with an Oscar nominee and three additional celebrities. According to CaptionBot website, engineers from Microsoft Cognitive Services combined three different APIs (Microsoft Computer Vision API, Emotion API and the Bing Image API) to build their latest AI experiment:

I was created to showcase some of the new capabilities ofMicrosoft Cognitive Services. These new capabilities are the result of years of research advancements (some of them summarized here). Specifically, I use Computer Vision and Natural Language to describe contents of images. I am still learning, so sometimes I get things wrong.

Users who want to try the online tool can either upload their own photo or give the URL to an image. CaptionBot will then automatically add a caption to describe your image content, but results can go from very accurate to hilariously wrong. You can rate the results to improve the algorithms, but as we saw today on Twitter some users definitely got some mixed results.

.@Microsoft's #CaptionBot is pretty, neat, almost always spot on, except when it isn't pic.twitter.com/VrB7F8Bhaw

Really #CaptionBot? You had to go there...
Check yourselves: https://t.co/VbN8kDr8I0#indiedev #gamedev #indiegame pic.twitter.com/zKh16rkhdm

We also played with CaptionBot and we have to say we were not so impressed: can you believe that a Microsoft Bot is not even able to recognize Microsoft CEO Satya Nadella?

The Guardian noted that CaptionBot was able to successfully top major celebrities like Taylor Swift and Kanye West, and the AI sometimes tries to describe emotions using emojis but can easily get confused. However, it doesn't seem that Internet trolls succeeded to hack the AI to turn it the experiment into another Tay fiasco. Have you tried to play with CaptionBot? Tell what you think of it in the comments.