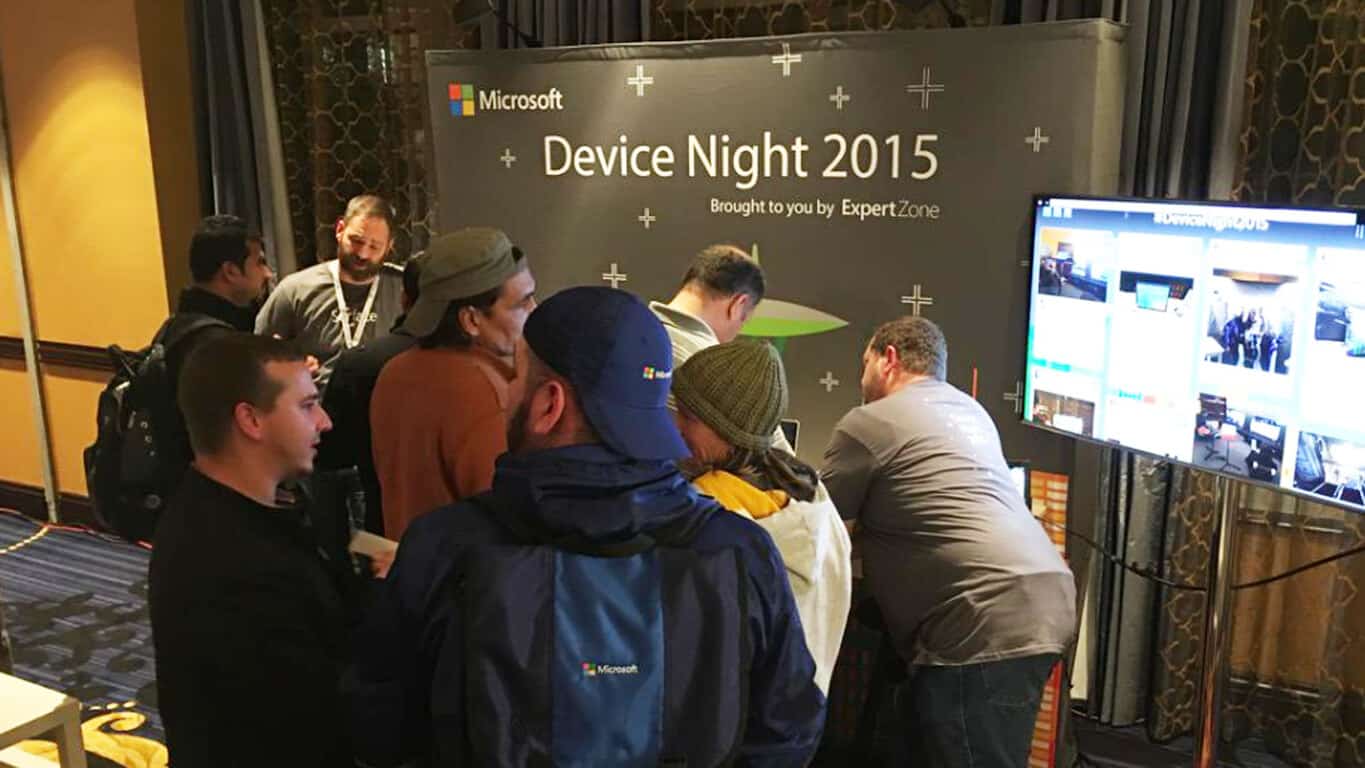 Last week, we reported that Microsoft announced their ExpertZone team would begin hosting Microsoft Device Night 2015 in major cities across the US and Canada. These nights are designed to provide retail sales staffs with hands on demonstrations of Microsoft’s newest devices, which were announced on October 6th. The events feature chances for retail professionals to learn more about the devices and how best to show them to future shoppers. But as the first events kicked off last night, twitter feeds also showed there was food, lots of people, and chances to win new Microsoft gear.
Following the twitter hashtag of Devicenight2015 shows how successful the first events in Boston and San Francisco were with large turn outs and a lot of people being impressed with the latest hardware produced by Redmond.
A post by @WTFGamersOnly shows the size of the crowd.
https://twitter.com/WTFGamersOnly/status/656298324820029441
Twitter user @Matt_likes_tech reports that people were still lined up to try out the Surface Book as the event was closing (lead image credit).

First #DeviceNight2015 event comes to a close, and people are still lined up for hands-on time with Surface Book. pic.twitter.com/3OnW4m0Z1F

Those who did manage to get their hands on a Surface Book seemed to be quite impressed.
https://twitter.com/jaemastercho/status/656259278848815104

https://twitter.com/Solar257/status/656247225610326016
But there was plenty of other devices to try out besides the Surface Book. There were hands on demonstrations of the new Lumia 950 and Continuum, the new Windows 10 Mobile feature to allow your phone to act like a PC with monitor, mouse and keyboard.

#DeviceNight2015 Do you continuum? I will for sure #Lumia950 # Microsoft pic.twitter.com/SjCzAwnwnZ

Attendees also got to play around with the new Microsoft Band 2 as well as Xbox One running the upcoming Windows 10 update.
https://twitter.com/RaqueValhalla/status/656309789228556288

If you are a retail professional and interested in attending a Microsoft Device Night, head over to their website to register. But do so quickly as the upcoming events in Los Angeles, New York, and Seattle have already been fully booked.

Halo 5: Guardians to require 9GB day one patch for multiplayer, will auto-update if pre-ordered