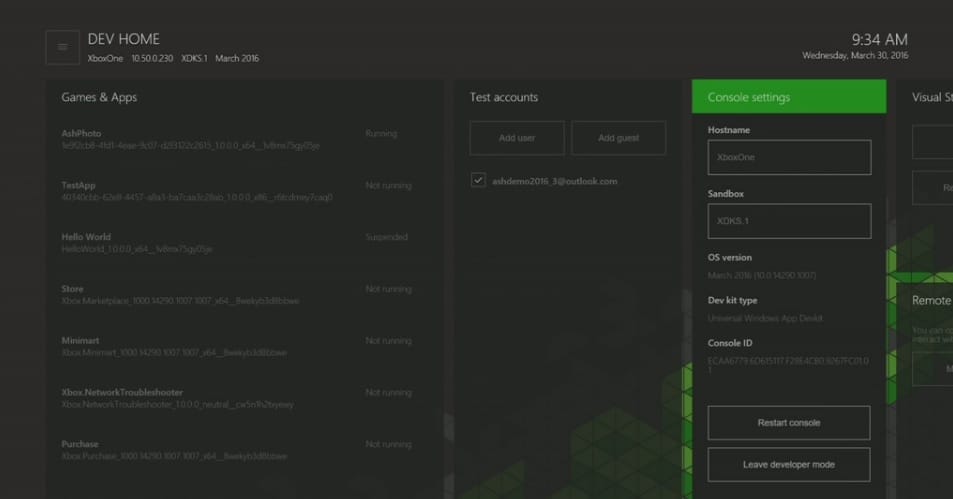 The Universal Windows Platform (UWP) is a great way for developers to make apps for Windows 10 and now it can be used for making apps for Xbox One too. Microsoft had announced a while ago that UWP apps were coming to the Xbox One as well as the planned functionality for the Xbox One to be used as a developer kit and at Build 2016 earlier today, Microsoft fully revealed how apps would work and how developers could use the console to design them.

During the conference, Microsoft’s Ashley Speicher demonstrated how easy it is for developers to transform their Xbox One console into a functional dev kit through a new mode called, Dev Mode. On the Xbox One, game developers can deploy apps made in Visual Studio and preview them on the Xbox One as a UWP app just like they would on other Windows 10 devices.

Developers will be able to incorporate all of the Xbox One’s features such as speech recognition and Microsoft has made it easy to switch in and out of the Xbox One Dev Mode to the new Retail Mode to preview their work, which is essentially the version of the operating system that consumers experience.

For more information on how to activate this new Dev Mode on the Xbox One and get started as an app developer on the console, check out our full guide here.