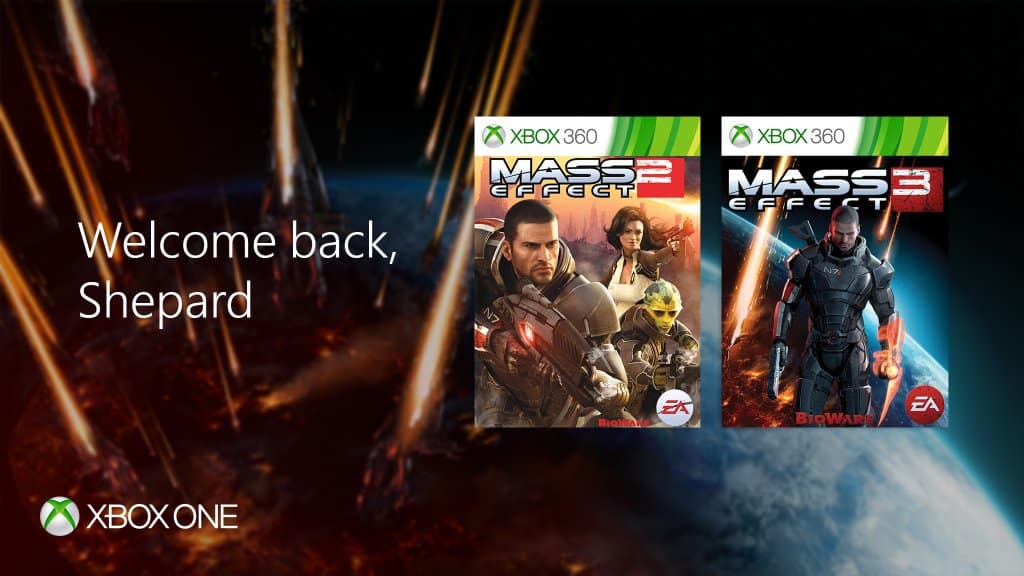 The Xbox team has announced today that Mass Effect 2 and Mass Effect 3 are the latest games to become playable on the Xbox One via backward compatibility. As fans of the game may know, the announcement was made on "N7 Day," a yearly celebration of the popular science fiction franchise every November 7.

A year ago, the first game of the trilogy was among the first batch of titles to become backward compatible on the Xbox One (Microsoft was a co-publisher of the game). However, Mass Effect 2 and Mass Effect 3 have never been available on the Xbox Store, and this situation did not change today: to play both games them on your Xbox One, you’ll have to buy a physical Xbox 360 copy while all the optional DLCs are available on the Xbox Store. This is quite unfortunate as both games are available in digital on the Playstation Store for Playstation 3 owners.

Still, this is great news for Xbox One owners as these action role-playing-games are still one of the best games you can play on last gen consoles. Please find the official descriptions below:

Across the galaxy, entire human colonies are vanishing. As Commander Shepard, you will recruit an elite team of the galaxy’s most dangerous and skilled experts, and lead them on an assault into the most dangerous area of the galaxy - from which you might not return. Download new equipment and missions to continue your adventure even after the main story is complete. They say the mission is suicide. Prove them wrong.

Mass Effect 3 plunges you into an all-out galactic war to take Earth back from a nearly unstoppable foe – and how you fight that war is entirely up to you. With over 40+ perfect review scores, USA Today heralds Mass Effect 3 as "the first true blockbuster of the year."

Electronics Arts and Bioware also released today a new trailer for Mass Effect Andromeda, the next episode of the franchise which is expected to be released in Spring 2017 on Xbox One, Playstation 4 and PC, you can watch it below.

As the full Mass Effect trilogy is now available on the Xbox One via backward compatibility, it's now the perfect time to play them once again before the release of the much anticipated Mass Effect Andromeda. However, we really hope that EA will one day make both Mass Effect 2 and 3 available to purchase on the Xbox Store.