Microsoft is continuing to improve the Polls experience in Teams meetings that launched back in November 2020. At the moment, Microsoft has placed a cap that only allows a maximum of 1000 participants to attend Teams meetings. With such a large quorum, it is important to ensure that everyone’s opinion is factored in during the decision-making process and that they are able to express themselves properly.

The company has announced that it is further enhancing the Polls app in Teams with a new feature, Instant Polls. On top of using the Polls app to drive engagement and alignment, you can now use the Install Polls feature in Teams to quickly engage with the audience and collect feedback from them.

Making a decision during a meeting can be quite tedious, more so if it is online and all participants have to share their thoughts for the quorum to come to a consensus. However, meeting presenters can now get real-time feedback during ongoing meetings using the Instant Polls feature. As they can create polls which can in turn be used to engage the participants and help them come to an informed decision.

Instant Polls can easily be launched by meeting presenters and can be used to “take the pulse of your audience and gather opinions and feedback during the meeting”. What’s more, it features three pre-defined poll types, that is, Yes/No, Thumbs up/Thumbs down, and Like/Dislike.

To use this feature, simply click the Polls button and ask the question you’d like to get a response to the audience. And finally, select the option set you want to use in the Launch instant poll section which is located in the Polls pane. 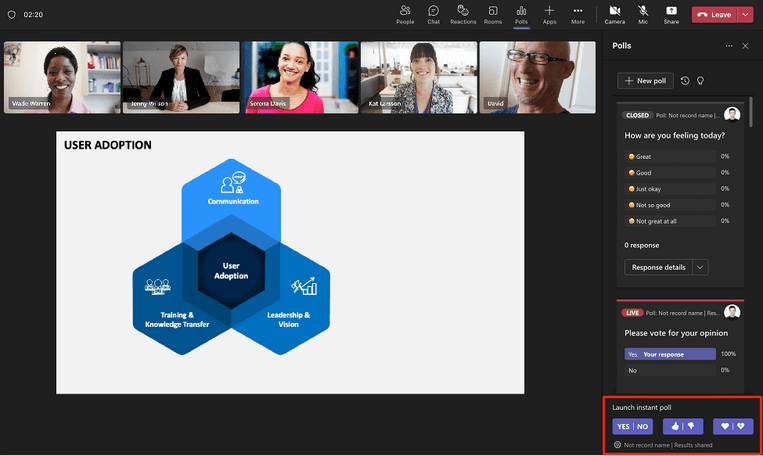 This feature is already available for both Business and Education subscribers. However, it comes with one known issue, regardless of the language and locale settings you’ve configured in the application the Yes/No option will not be translated. It will remain in English for all users.

In other Teams related news, Microsoft added a plethora of features in November, the company also made it easier for users to open PDF files using Adobe Acrobat by default and most recently launched new communities features for Teams.