Inside Xbox is coming back on April 16 with Xbox Game Pass, Backward Compatibility news and more - OnMSFT.com Skip to content
We're hedging our bets! You can now follow OnMSFT.com on Mastadon or Tumblr! 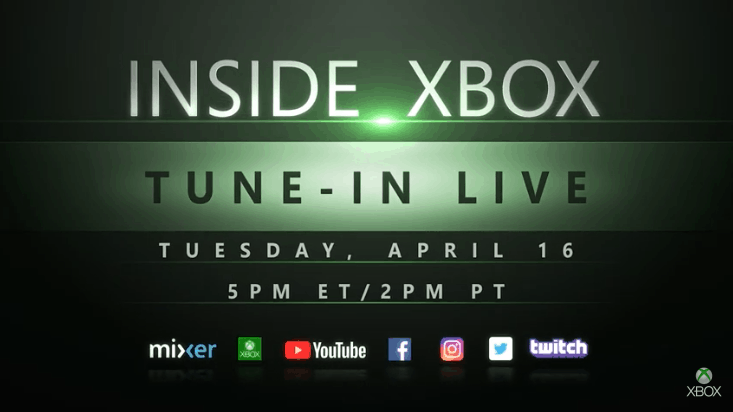 The Inside Xbox monthly webcast will be back on Tuesday, April 16 for another hour-long episode. The Xbox team teased today some “exciting Xbox Game Pass news,” just in case the six new games announced earlier today weren’t enough. You can also expect “a handful of exciting Back Compat announcements, and several surprises we’re saving for the show itself,” wrote Xbox Wire Editor in Chief Will Tuttle.

The April episode of Inside Xbox will also cover the Sea of Thieves Anniversary Update, as well as Rage 2, the upcoming post-apocalyptic shooter from Avalanche Studios. Rod Fergusson, Studio Head of The Coalition will also be a special guest, and we could hear more about Gears 5 or the new Gears Pop! mobile game that should get a closed iOS beta very soon. The Xbox team also plans to share some details about its presence at E3 2019, including Xbox FanFest.

Microsoft will once again offer “MixPot” rewards to Xbox fans watching the upcoming Inside Xbox episode on Mixer. This time, the free Mixpot will include an Xbox avatar item from Rage 2 as well as he Ebon Flintlock in-game accessory from Sea of Thieves. If you don’t want to miss it, make sure to mark your calendar on April 16, at 2 p.m. PT / 5 p.m. ET, or you can also follow the Xbox channel on Mixer to get a notification when the streams kicks off.

How to fix errors when installing Microsoft Edge Insider builds