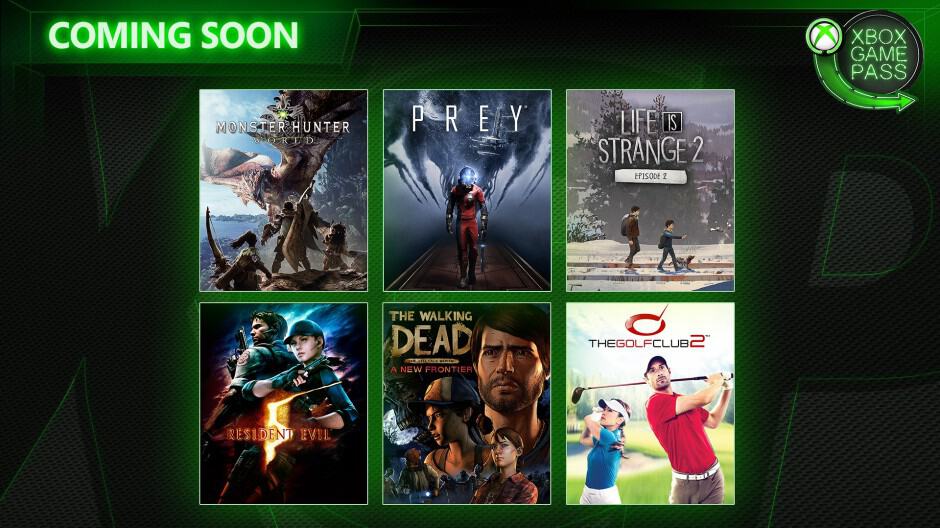 Microsoft has just announced the next six new games coming to Xbox Game Pass this month. First of all, Arkane Studios’ survival horror game Prey will join the catalog tomorrow, April 11, along with The Golf Club 2. Prey will be the latest Bethesda game to join the Xbox Game Pass line-up after Doom, Fallout 3 and 4, and The Elder Scrolls Online: Tamriel Unlimited.

The other big new game coming to Xbox Game Pass this month is Monster Hunter: World, Capcom’s critically-acclaimed action RPG title released back in January 2018. The game will be available on Game Pass on April 18, along with The Walking Dead: A New Frontier. The latter is the third season of Telltale Games’ The Walking Dead series of episodic games, and we remind you that the seasons one and two are already available on Xbox Game Pass.

The episode 2 of Life is Strange 2 will also be available on Game Pass on April 24, three months after the first episode was added to the catalog. Square Enix said back in January that all future episodes will be added to Game Pass three months after their official release, which means that the upcoming episode 3 (to be released on May 9) should join the Xbox Game Pass catalog in August.

Lastly, Resident Evil 5 will be available on Xbox Game Pass on April 25. A couple of Resident Evil games have left the catalog in recent months, so it's nice to see a new episode being added to the game subscription service. That's six new Xbox Game Pass games in total that Microsoft announced today, but as asual, there may be a few more surprises coming later this month.