While Microsoft has been rather cagey on the details of Redstone, Windows engineers and developers are ready to talk about an important aspect of the operating system with regards to scaling. With the Consumer Electronics Show under way, the event has helped showcase a centralized resolution theme for PC and PC-like devices for this upcoming year. Unfortunately, many Windows users have notoriously fallen victim to the operating systems lack of standardized scaling practices. That is, until Windows 10 Redstone.

In a series buried away in the Insider Hub called “Made by you,” the Windows team goes into great length and detail about how things are going change when it comes to scaling in Windows 10.

Scaling is a complex problem for the open Windows ecosystem, which has to support devices ranging in size from roughly 4” to 84,” with densities ranging from 50DPI to 500DPI. In Windows 10 we took steps to consolidate and simplify our developer story for scaling and to improve the end-user visual experience. Stay tuned for future release!”

Thanks to some detailed criticism and real-world examples provided by the Windows 10 Insider community, the Windows team can accurately tailor upcoming Windows 10 development to cater to the increasing pixel density wars developers are encountering.

To begin, the Windows team covers a glossary of terms that are relevant to the way Windows 10 currently handles scaling that include: 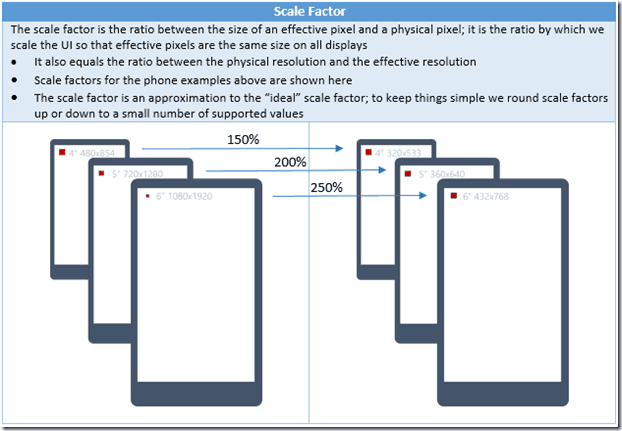 As most Windows users already understand, or can relatively grasp, Universal Windows Apps (UWP) look great on high-resolution screens while some updated Windows Presentation Foundation (WPF) apps also look great on high DPI screens, and the majority of the millions of Win32 desktops apps look like oatmeal against a stained glass window.

From this starting point, the Windows team has taken up the task of unifying how content scales across devices, extended the scaling system an important system UI element to handled upwards of 8K displays and improved Windows support for more OS and application content. Before the new unification and extension in resolution scaling, Windows would interval its scaling options from 100%, 125% 150%, 200%, and 250%. In Windows 8.1, Store apps would scale to 100%, 140%, and 180%, resulting in potential side-by-side visual app inconsistencies. Adding to the visual nightmare were hi-res screens that would cap-out at different points and kick back the all-too-familiar “too small to read” windows.

In Windows 10 and subsequent releases, the scaling factors have been adjusted to read in intervals that range from 100% to 450% where there is enough headroom in displays for supporting 6-inch 4K phone screens and up to 23” 8K desktop monitors.

As part of the this effort, Windows 10 has polished the most commonly used desktop UI to look beautiful and clear even at 400% scaling.”

Contrary to popular belief, the Windows team managed to work on the Windows 10 Mobile scaling as well, overhauling the entire mobile shell scalability. Most of the effort, understandably, is geared toward ensuring UWP apps run at the right size on phones and phablets, but also on desktop displays. The overall work will probably blossom as more people make use of developing apps with support for Continuum.

Beyond the work to up the scaling system, the Windows team’s work with dynamic scaling is being put to the grind with not only UWP HTML and XAML apps but with UI elements such as:

Even with the above improvements, there is work still to be done and the Windows team is fully aware. With Redstone rumored to be hitting devices sometime during the summer, the Windows team list a few items regarding scaling, they were unable to get to but hope to have ready soon.

Perhaps, the most front-facing UI element on any Windows users desktop are the mismatch of icons representing open folders, most used programs, and most accessed content. Examples include the Lync app and desktop icons. Microsoft plans to address this in Redstone.

Another instance in which the Windows team is looking to address, specifically, in Office apps. Even though the UWP (the ones that took forever to release) are fully per-monitor scaled in Windows 10, classic desktop apps are unfortunately still utilizing older Windows “system scaling factors,” resulting in blurry bitmap scaling when docked on a second monitor. Other poorly displayed bitmapping desktop applications include Notepad++, Chrome, and Firefox. The Windows team is working feverishly (well maybe not for Chrome of Firefox’s sake) at improving migration tools for more complex Win32 applications.

Bottom line, the Windows team has done a lot of foundational work to prepare Windows 10 for an ever-changing future. Hopefully, with the Redstone update, Windows users will begin to see more of that work shine through in implementation and polish. Executing on the long-dreaded resolution issues of Windows would be a huge first step in the right direction.