First images emerge of Eve's V crowdsourced Windows 10 2-in-1, coming to Indiegogo in November - OnMSFT.com Skip to content
We're hedging our bets! You can now follow OnMSFT.com on Mastadon or Tumblr! 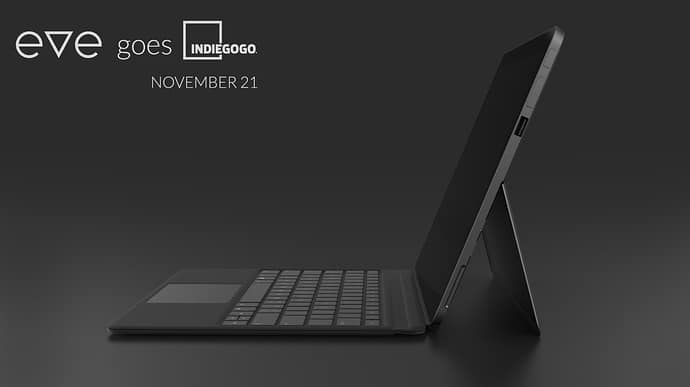 Back in April, Finnish company Eve Technology teased a new 2-in-1 Windows 10 tablet codenamed the Pyramid Flipper. The Surface-like design of the hybrid device was actually a result of a crowdsourced effort, with the company explaining during a Reddit AMA back in August that "this has led to many advantages over its competitors."

Yesterday, Eve Technology posted on update about its upcoming Windows 10 device and we now have more details about its go-to-market strategy (via Neowin). First of all, the product’s final name is now the Eve V which the company chose after asking feedback from the community. Additionally, Eve Technology will launch its new tablet through an Indiegogo campaign which is expected to start on November 21. "Project is fully funded and in Indie GoGo users are not paying for development but for actual manufacturing of the product," the company added.

The final specs of the device are still not clear, though the company shared that it’s getting "top notch engineers to support us from Intel." Earlier this year, a previous specs list mentioned a 7th Gen Intel Core CPU, a 12-12.5" IPS LCD screen with 2160x1440p resolution or better, up to 16GB of RAM and up to 512GB of storage. "Price, final spec and A LOT more will be announced in the coming weeks" explained the company yesterday.

For those of you interested in this new product, be aware that only 500 devices will be available for purchase during the Indiegogo campaign, with global shipments beginning in the first months of 2017. Let us know in the comments if you think this new Windows 10 hybrid could be a good addition to the Windows 10 ecosystem.