AdDuplex published today its latest Windows Devices Statistics Report for the month of November, which focuses on Fall Creators Update growth just a month after its public rollout. The company notes that the latest major Windows 10 release is propagating faster than the Creators Update did, and it’s now installed on 20.5% of Windows 10 PCs worldwide.

As usual, the report is based on data collected from around 5,000 Windows Store apps running AdDuplex SDK. The company also looked at Fall Creators Update growth by OEM, and this time Microsoft is well ahead of other PC OEMs with 45.4% of Surface devices already running Windows 10 version 1709. “Microsoft is clearly following a different pattern for FCU than it did of Creators Update on their own devices,” the company explained

Looking closer at Surface devices popularity, the latest data shows that the new Surface Pro is gaining ground with a 9.2% market share worldwide. “It still has ways to go to until it surpasses its older Pro siblings, but it’s quite likely to take the bronze from Surface 3 next month,” the company explained. As for the freshly released Surface Book 2, it’s already showing up on the chart with a 0.4% market share. As a reminder, only the 13” model is currently available in select markets, with the 15” version to be released in the US on Thursday, November 30. 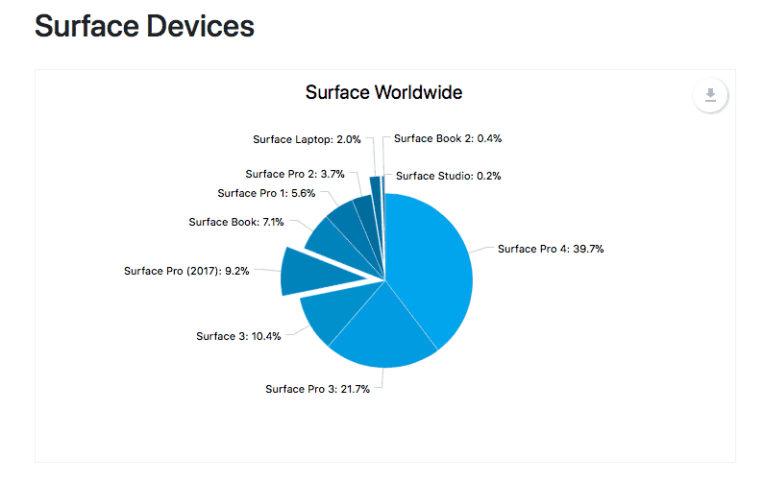 Unfortunately, there is no new data for Windows 10 Mobile this month. Microsoft’s mobile OS did receive its own flavor of the Fall Creators Update last month, which only rolled out to fifth generation Lumias and a couple of native Windows 10 Mobile handsets from third-party OEMs. Last month, the company reported that “overall OS version share numbers didn’t change much since June,” with only 20.9% of Windows Phone users running any version of Windows 10 Mobile.

Next Windows 10 Insider builds to include Timeline, Sets, says Microsoft