The glory of Microsoft’s Surface Book may have made some forget that it’s not the first PC maker to separate the screen and base of a laptop (it is the first to put a GPU in the base, however.) In fact, the design is well-acquainted in the hybrid world, with Acer being one of the chief proponents with their Switch laptop line, the latest entry of which, the Acer Switch 12 S, has just been announced at CES 2016. I will now make an admirable attempt to distill all the marketing speaks into stuff you care about.

The Acer Switch 12 S utilizes the tried-and-true latchless magnetic docking mechanism to transform between a super-thin tablet and a super-thin laptop: it’s as easy as pulling the screen off from the base, much more intuitive but arguably less secure than hybrids with locking mechanisms. Acer calls it updated hinge the Acer Snap Hinge Gold; while  I have doubts about the Gold part, the zinc-alloy connector and promised 6Gbps transfer rate should alleviate any performance concerns. 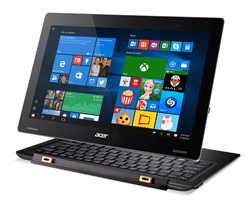 Besides the new hinge, Acer’s new laptop also packs some defining features: a Thunderbolt 3.0 on USB Type-C, Intel RealSense camera and pen support. This exceedingly rare port on a Windows laptop means that an external graphics card can be plugged in to raise graphical performance exponentially, and sure enough, Acer offers just that with their optional Graphics Dock. The Intel RealSense camera will come in handy for 3D scanning and printing. Support for Acer Active Pen along with the Thunderbolt port should put it squarely in competition with even high-performance ultrabooks like the Surface Book for artists and graphics designers’ hard-earned money.

Other specs are decidedly high-end ultrabook though not too special: Skylake Core M, up to 4K Gorilla Glass-enforced IPS screen, backlit keyboard, up to 8GB RAM and 256GB storage, 2 more USB 3.0 ports, 720p front-facing camera, Micro HDMI and MicroSD card reader. Overall the Acer Switch 12 S looks to be another worthy addition to the growng choice pool for Windows 10 hybrids. The laptop will be available in all regions from February with a starting price of $999 in Northern America, € 1,199 for EMEA, and 6,999 yuan in China.