Cyberpunk 2077, one of the most anticipated games of 2020 launched in a pretty terrible state last month, and developer CD Projekt Red has been on an apology tour ever since. Yesterday, the studio’s co-founder Marcin Iwiński appeared on video to apologize and share a personal explanation of what led to the game’s botched release.

Iwiński pointed out the difficulty of shipping such an ambitious game on PlayStation 4 and Xbox One console, though the exec said that “our testing did not show many of the issues you experienced while playing the game.” This is still pretty hard to believe, especially since Iwiński also said that the team continued to work on the “day zero” update for consoles until the last minute. CD Projekt Red only sent console review codes to the press two days before the game’s release on December 10, “which was later than we had planned,” the exec admitted.

Anyway, the damage has been done and Microsoft and Sony quickly stepped up to extend their refund policy for dissatisfied customers. Sony has also removed the game from its PlayStation Store, though CD Projekt is working the company to bring it back there as soon as possible.

As for what’s coming next, CD Projekt will continue to focus on fixing bugs in the short term, with a new patch coming in the next 10 days. “We have decided that our priority is working on the most important fixes and updates. We will be releasing free DLC afterwards — we’ll have more to say about that in the coming months,” Iwiński said. 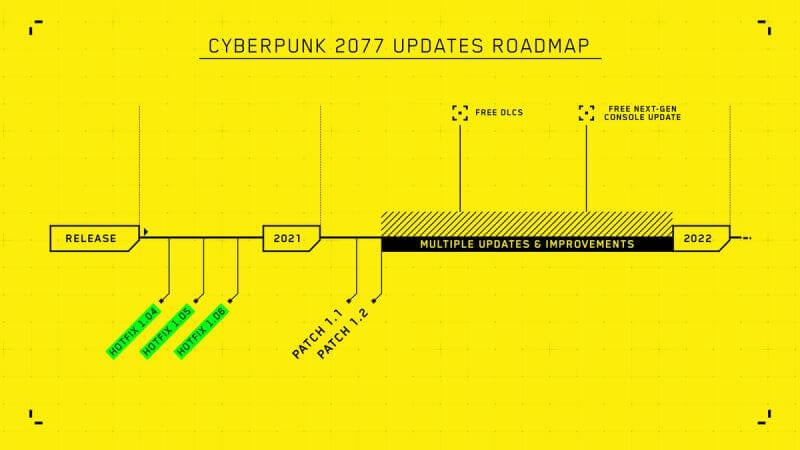 The free next-gen update for Xbox Series X|S and PlayStation 5 consoles is still on the card, though it won’t be ready until the second half of 2021. In the meantime, the game is still best-played on Xbox Series X, which has a 60FPS Performance with dynamic resolution that the Xbox Series S or the Xbox One X don’t have.