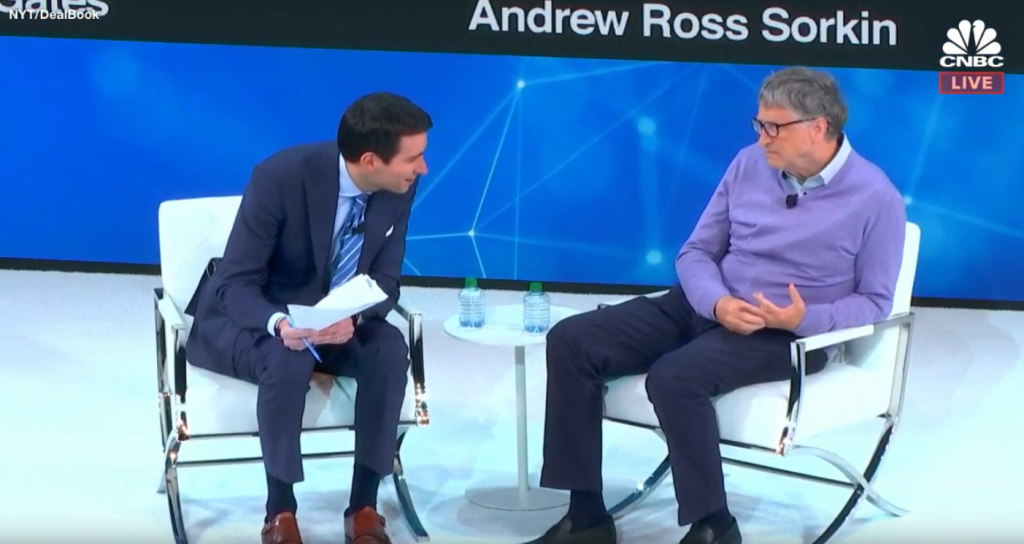 The New York Times held its DealBook conference earlier today and had the rather chatty and candid former Microsoft CEO, Bill Gates on stage amongst its list of guests.

For roughly fifty minutes Gates spoke rather freely about topics ranging from an alternate present where Windows Phone and Android have swapped places to his hesitation about meeting current presidential nominee Elizabeth Warren who has famously targeted billionaires with a potential wealth tax.

Despite wielding an Android phone now, Gates apparently still has Windows Phone on the brain as he explains to NY Times financial columnist Andrew Ross Sorkin that the failed mobile OS was just a mere three months away from potential greatness.

“We were just three months too late on a release Motorola would have used on a phone, so yes it’s a winner takes all game. Now nobody here has ever heard of Windows Mobile, but oh well. That’s a few hundred billion here or there.”

Most notably, Motorola and Verizon succeeded in marketing the combined efforts of Google and the carrier with their line of Droid branded smartphones that presumably Gates believes could just have easily been Windows, had the company not missed its window of opportunity.

Beyond the three month window where a Motorola hail mary smartphone effort could have changed the sails of Windows Phone, Gates blames his inability to focus on mobile operating systems the way the company needed him to, on the antitrust lawsuit the company was embroiled in.

“There’s no doubt that the antitrust lawsuit was bad for Microsoft, and we would have been more focused on creating the phone operating system and so instead of using Android today you would be using Windows Mobile,”

“If it hadn’t been for the antitrust case... we were so close, I was just too distracted. I screwed that up because of the distraction.”

In the end, Google went on to compete with Apple for mobile phone adoption and Microsoft eventually pivoted to the cloud, leaving most of the tangential smartphone consumer-centric developments by the wayside.

Even with missing the prolific smartphone revolution, Microsoft maintained its position as a top tier technology company and thus keeps Gates' financial evaluation among the top three richest people on earth, an accolade that's increasingly becoming a political albatross for the philanthropic billionaire.

As progressive senators and Democratic presidential nominees such as  Elizabeth Warren and Bernie Sanders gain national popularity, their calls to address income inequality have also taken center stage; many of which call upon billionaires to pay larger amounts of taxes to help fund state and federal programs.

Bill Gates on a wealth tax:

"But when you say I should pay $100 billion, then I'm starting to do a little math over what I have left over."

Seemingly Gates is using hyperbole to highlight his point as neither Warren of Sanders has asked billionaires to pay even that high of a tax percentage. With that being said, Gates is up for compromising in finding alternate ways to tax billionaires that include taxing philanthropic gifts to private foundations. When asked if he'd speak with Warren, who's spearheading a wealth tax, Gates seems open to the idea but doubts the presidential nominee is "open-minded" enough to sit down with him, due to the sheer amount of money that's attached to his name.

Gates was asked several other politically charged questions, to which he seemingly answered as openly as possible, including who he'd vote for in a head-to-head between Warren and Trump, his dealings with convicted pedophile Jeffery Epstein, and whether or not Facebook should be fact-checking political ads.

To hear his answers on those topics and more, check out the video below.

Microsoft Teams: where it is and where it's going