Windows 10’s interface makes extensive use of transient scrollbars. You’ll find them throughout UWP apps from the Microsoft Store and also in core UI components, such as the Start menu. These scrollbars are hidden by default and only appear when you move the mouse, hiding again a few seconds later.

Disappearing scrollbars save a few pixels on the screen but can be confusing and difficult to use. If you find yourself hunting for invisible scrollbars, or are annoyed by having to hover over them before they appear, read on to learn how to turn this behaviour off. 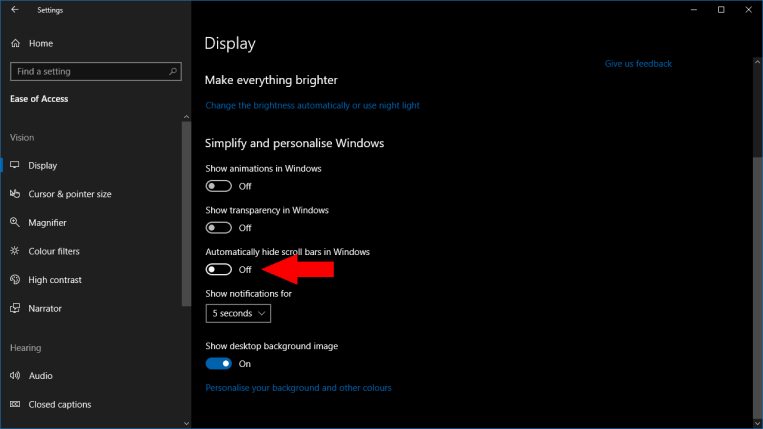 The option is controlled by a one-click setting within the Settings app; as ever with Windows 10, the hard part is knowing where to find it. Rather than adding it to the Personalisation category, you’ll find the control under the Ease of Access section.

Launch the Settings app and click the “Ease of Access” tile. On the page which appears, look for the “Automatically hide scroll bars in Windows” toggle button under the “Simplify and personalise Windows” heading. Click the button to turn it to the “Off” position.

You’re all done! The change will take effect immediately, so you’ll see the Settings app’s own scrollbars appear as shown in our screenshot above. Wherever there’s a scrollbar, it’ll now be permanently visible on the screen and ready to use. A small change, but one you may find useful.

Gears 5 Versus Multiplayer Tech Test to begin on July 17