Windows 10 automatically updates with new features and quality improvements as you use your device. Generally, this process works without any intervention, ensuring you've always got the latest release of Windows. In this guide, we'll walk you through pausing Windows Update and why you might want to do so. 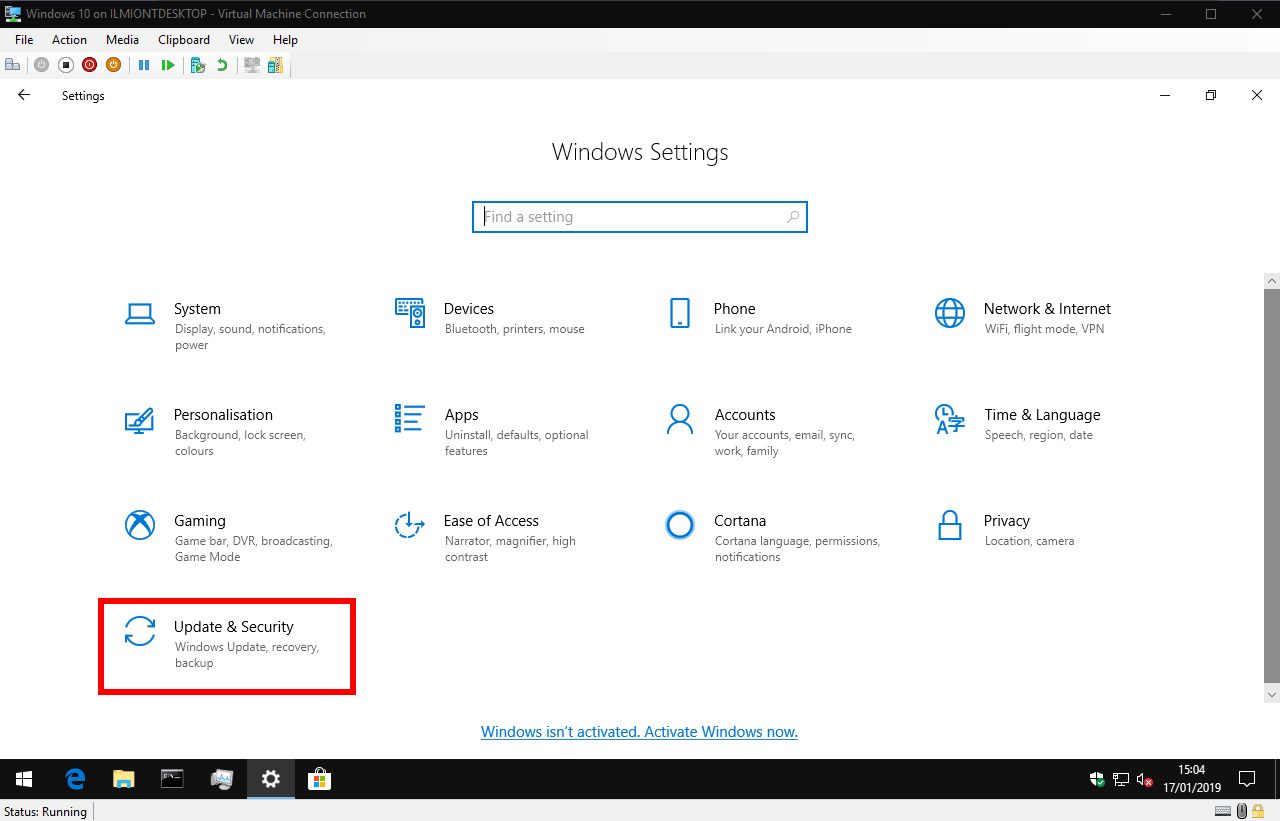 Launch the Settings app and open the "Update & security" category. Your next steps depend on which Windows 10 version you're running. At the time of writing, Windows 10's latest public release is version 1809, the October 2018 Update. If you're running a newer release – currently the Insider Preview builds for version 19H1 – you should skip to the "19H1 Changes" section below. You can follow our guide to identify your Windows 10 version if you're unsure.

In 1809 and older builds, the option to pause updates is only available in Windows 10 Pro. Unfortunately, Home users will need to wait until 19H1 is released – see the notes below. 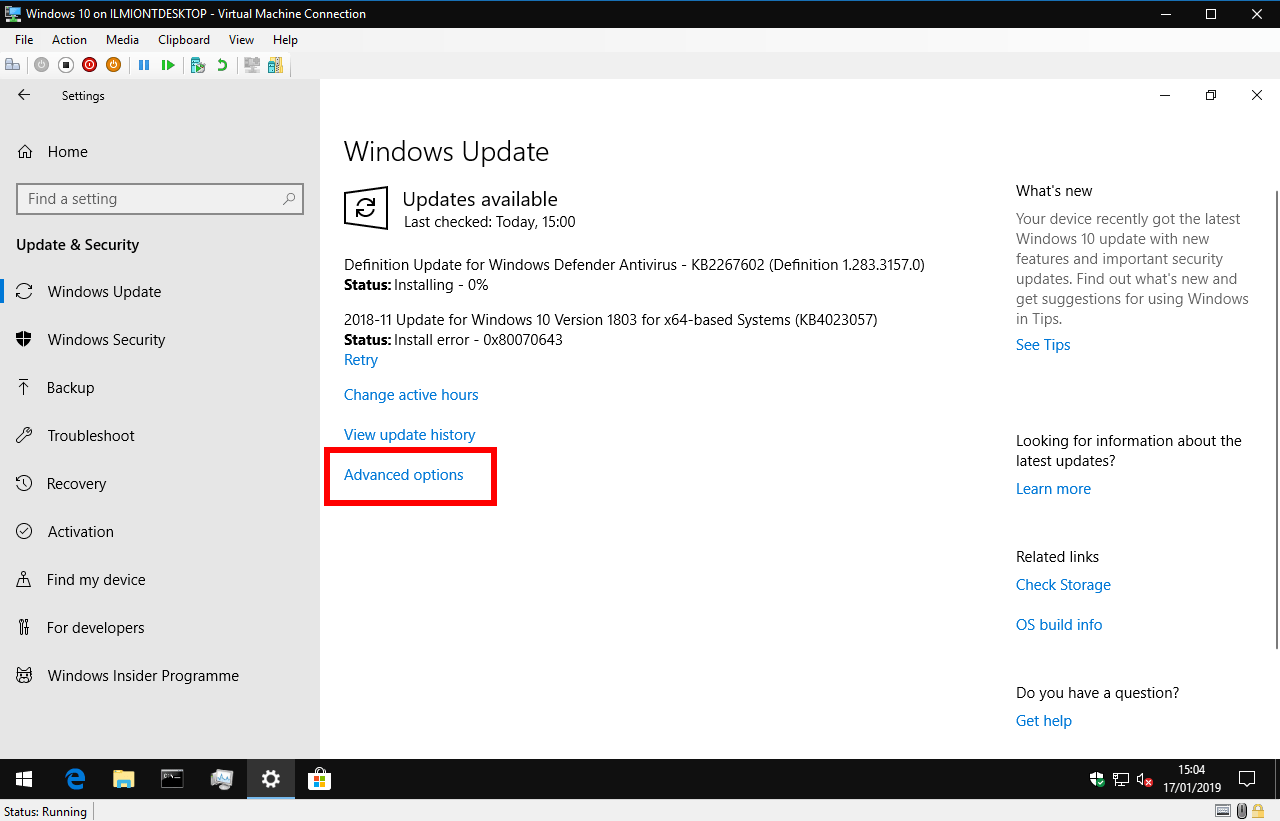 Under the "Pause Updates" heading, click the toggle button into the "On" position to suspend Windows Update. The change will be enforced for a period of 35 days, during which no updates will be installed. The screen informs you when updates will be re-enabled. 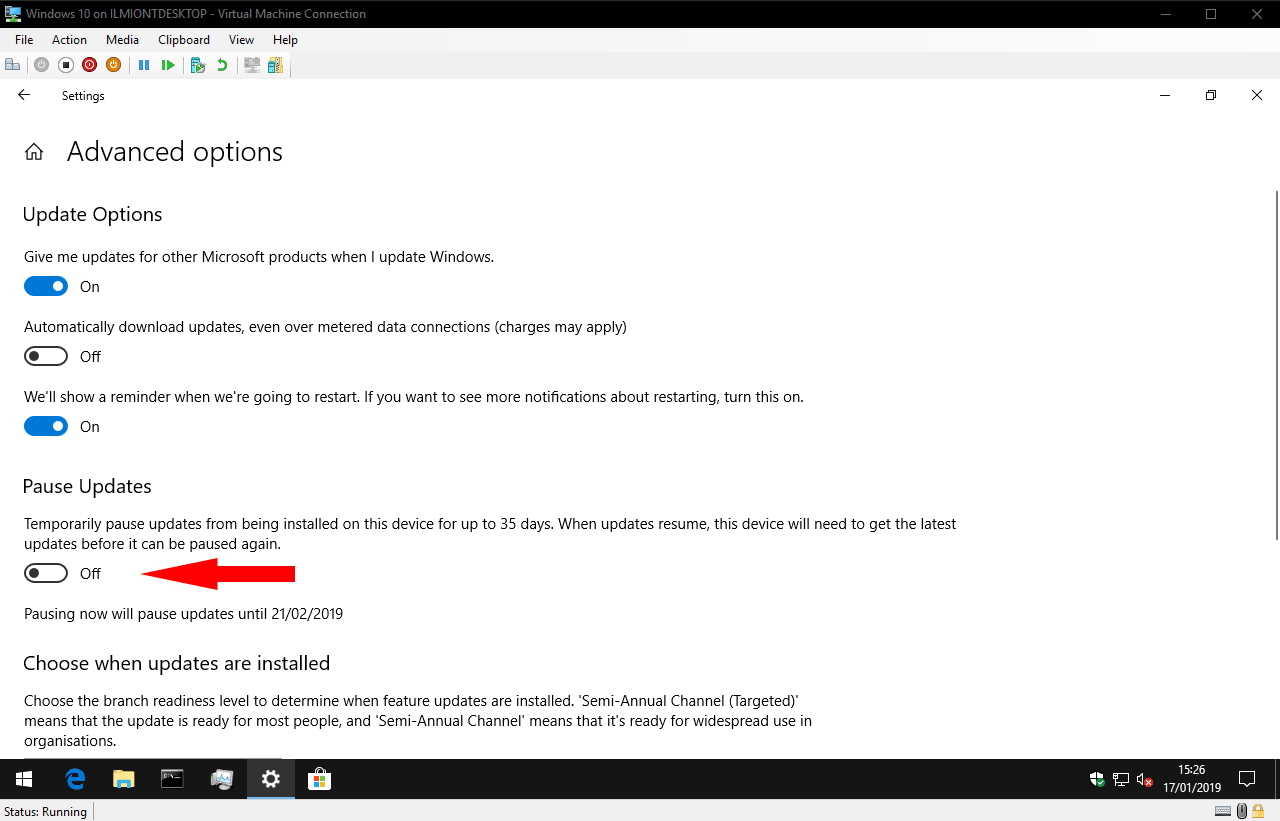 If you want to lift the update block earlier than the 35 day period, return to the settings page and disable the setting. When the block is removed – whether manually, or at the end of the 35 days – your device will automatically install all pending updates. You can't pause updates again until this process is complete.

This option gives you the ability to suspend any and all updates with a single click. However, you should think carefully before using it. There's two kinds of update and you won't necessarily need to suspend both.

Quality updates are released monthly and include important bug fixes and security improvements. Without these patches, your device could be at risk. However, quality updates – or cumulative updates, as they're often referred to – have themselves introduced issues in the past. If you're aware a new update is proving troublesome for devices like yours, pausing Windows Update might be your best option. 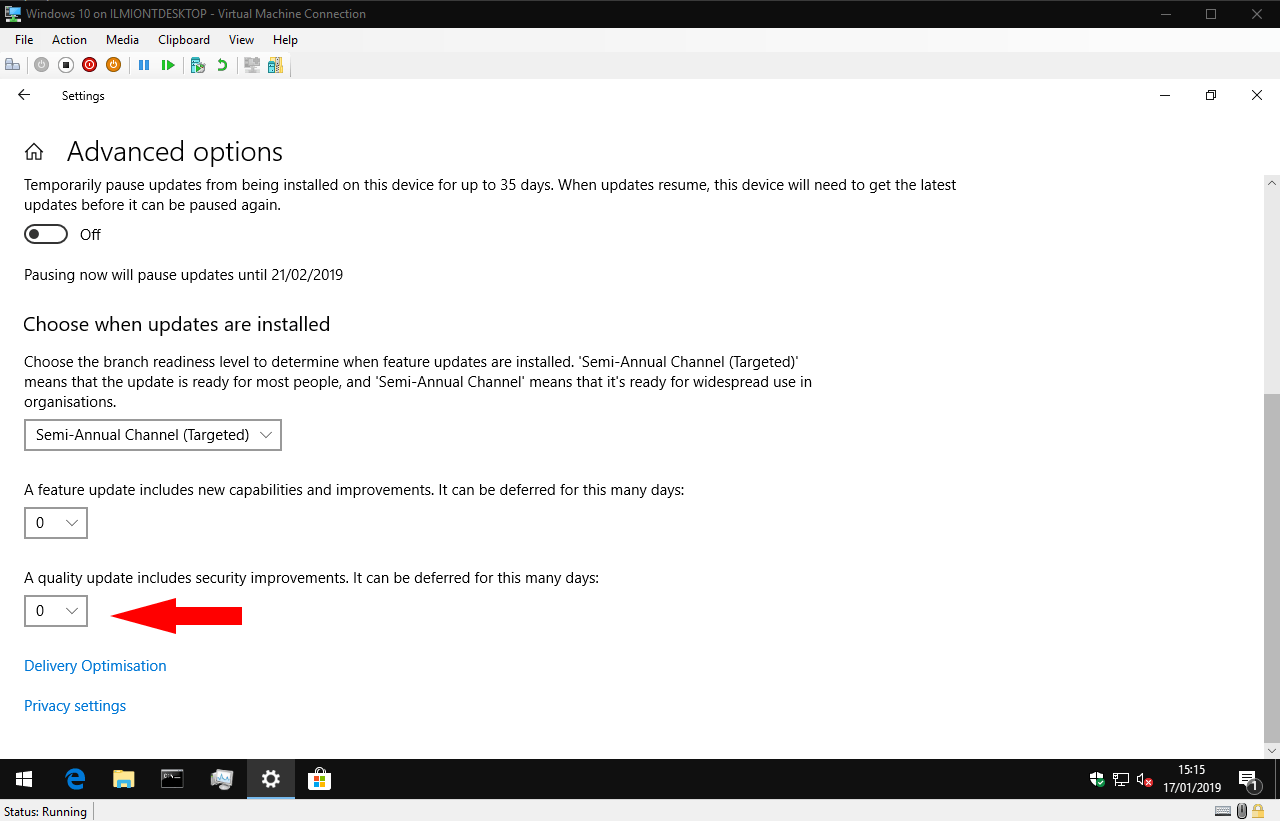 You can choose to pause only quality updates by scrolling down to the "Choose when updates are installed" header. Use the selection box at the bottom of the screen to choose how many days to defer updates by. You can suspend quality updates for up to 30 days, without impacting other types of update.

Feature updates are released roughly every six months. Per the name, they add new capabilities to Windows 10. They're much bigger update packages which include a new build of the operating system. Update times are longer, changes are more impactful and you'll see your device restart multiple times as it applies the new release. Feature updates are where compatibility problems usually occur, such as with the wave of problems experienced with the recent October 2018 Update. 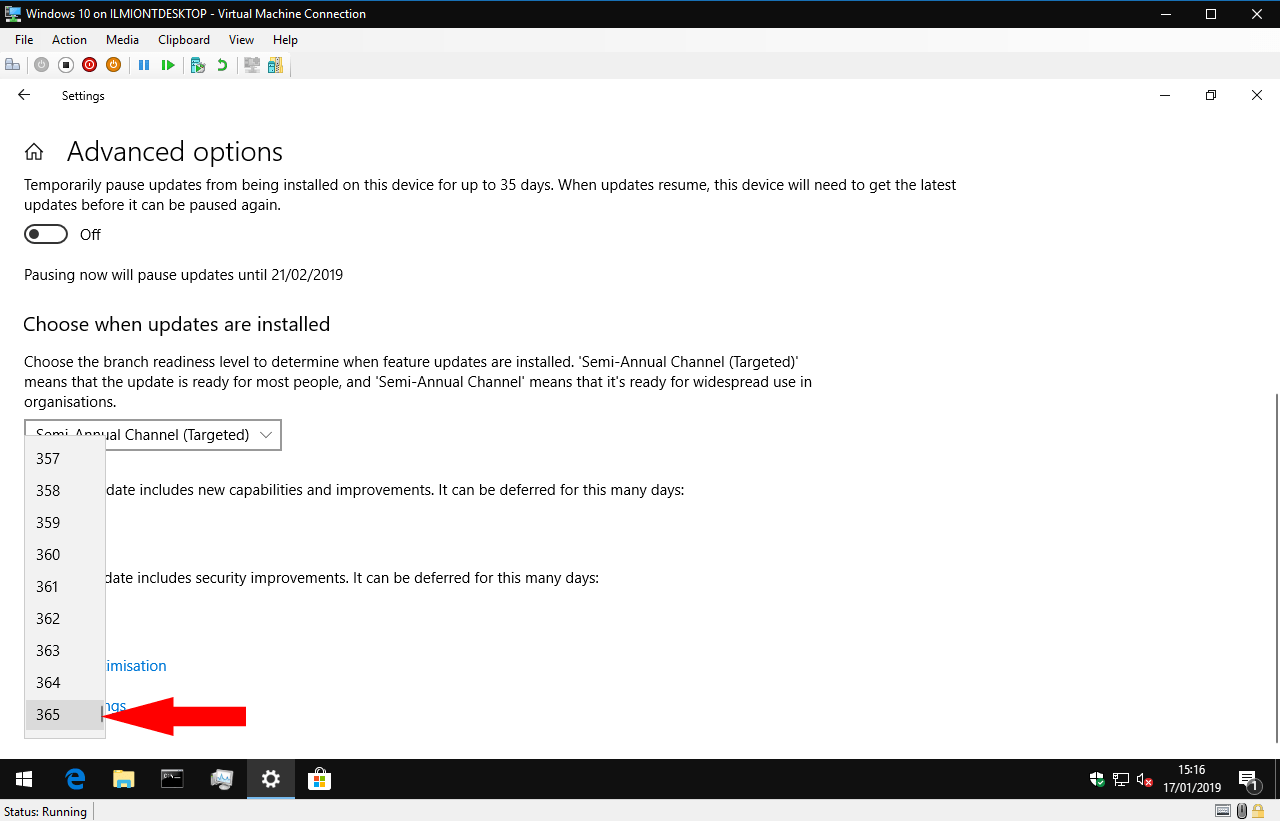 Feature updates can be deferred for up to an entire year using the selection box at the bottom of the "Advanced options" screen. Windows will refrain from attempting any automatic build upgrades during the selected period. This allows you to remain safely on your current build while any issues in new releases are discovered and patched.

The "pause updates" experience has been given an overhaul in the current 19H1 Insider Preview builds. The option to pause updates is now exposed on the main Windows Update settings page, not within "Advanced options." It's available to Windows 10 Home users for the first time too, letting everyone gain some control over the update process. 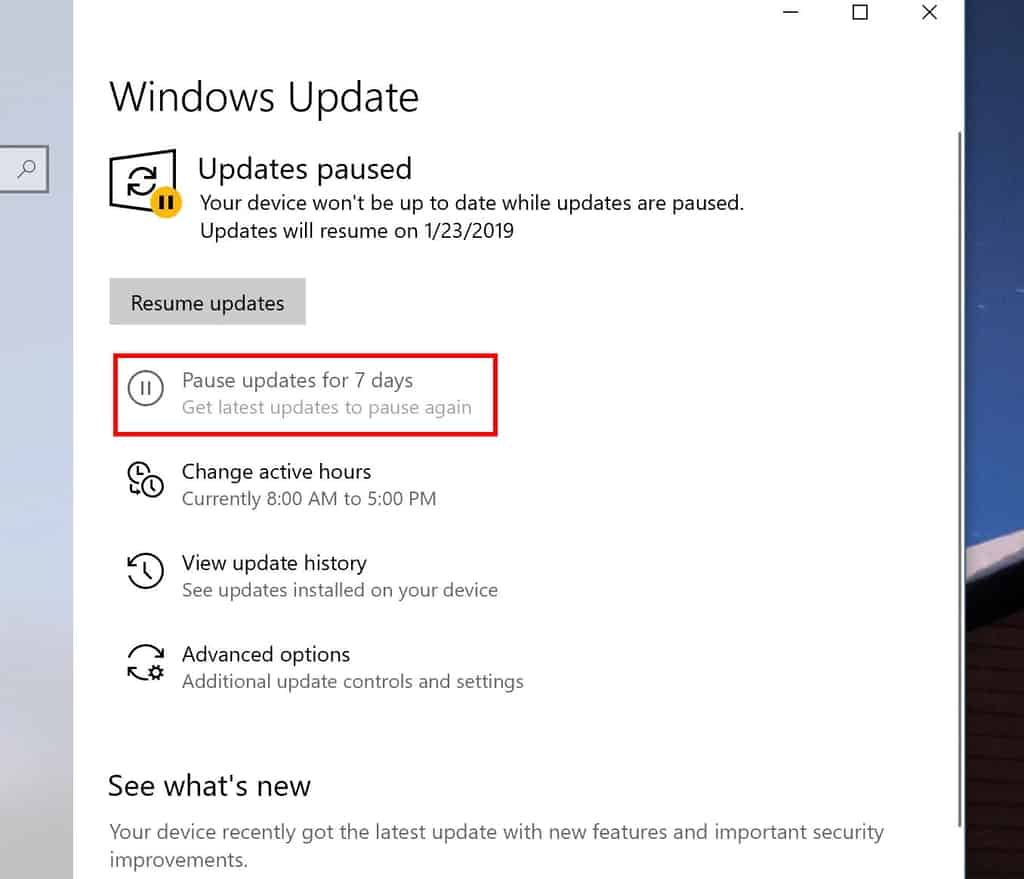 Unfortunately, some more advanced aspects of the experience appear to have been lost. Updates can only be paused for 7 days, unlike the 35 days offered in version 1809. Furthermore, we've found the individual feature and quality update deferral options have been removed from the interface entirely.

Since 19H1 is still under development, it's possible these features will be coming back before the public release. In its current state, 19H1 offers control to Home users for the first time, but represents a step backwards for Pro customers. We'll keep monitoring the changes and update this guide as the situation becomes clearer.

PlayerUnknown's Battlegrounds (PUBG) to get new Vikendi map next week