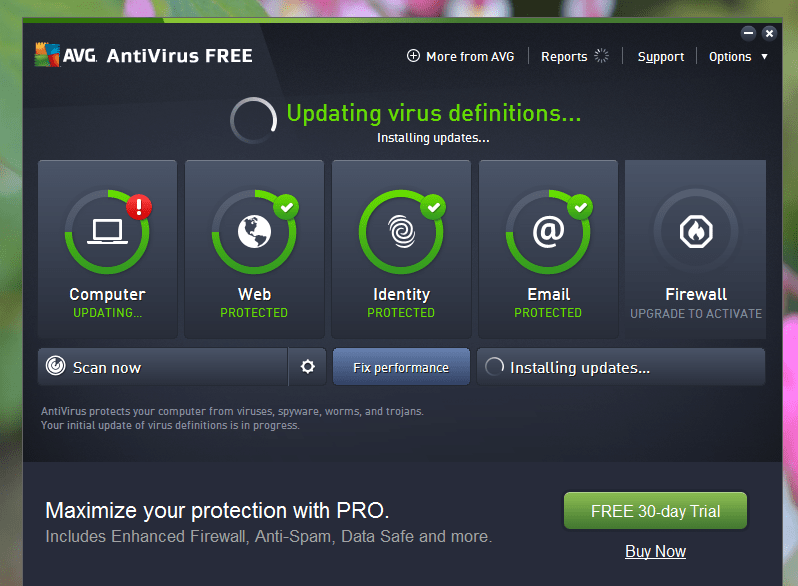 I'll admit it, I haven't used a 3rd party anti-virus product in years. Of course, I always have Windows Defender turned on, and before that I used Microsoft Security Essentials (and before that Windows Live OneCare), but today was the first time in ages I've installed AVG Anti-Virus Free Edition, my AV software of choice back in the dark ages.

No, I haven't given up on Microsoft's anti-virus protection, in fact just the opposite: I wanted to try out Microsoft's newest AV feature, released with Windows 10 Insider build 14352, Limited Periodic Scanning for users of other AV software besides Windows Defender.

Most, if not all, AV products "suggest" that you only run one AV program on your system, and indeed in installing AVG, it typically turned off Windows Defender. AV products don't get along very well together, so this is prudent, but with Microsoft's latest Windows 10 Insider update, Windows Defender can actually run alongside other AV products, offering you added security.

Here's how it works. If you have a 3rd party AV solution in place (the option won't appear if you only use Windows Defender), open up Windows 10 Settings, then Update and Security, and then Windows Defender, the one with the nice new shield icon:

You'll see that AVG has turned Windows Defender off, but you have a new option to turn on Periodic Scanning:

Even if you are using another antivirus program, Windows Defender can periodically scan and notify you of threats on your PC.

Microsoft says it scans about 500 million machines a month using its Malicious Malware Removal Tool and finds about 1 to 2 million infections, including on computers using 3rd party AV software.

When enabled, Windows 10 will use the Windows Defender scanning engine to periodically scan your PC for threats and remediate them.  These periodic scans will utilize Automatic Maintenance—to ensure the system chooses optimal times based on minimal impact to the user, PC performance, and energy efficiency—or customers can schedule these scans. Limited Periodic Scanning is intended to offer an additional line of defense to your existing antivirus program’s real-time protection.

Using Limited Periodic Scanning is the same as setting scheduling scans for Windows Defender when it's on, something you can do via the Windows Task Scheduler.

Now I had a lot of trouble trying to get this to work with AVG Free, it seems that along with shutting down real-time protection in Windows Defender, AVG also deletes the scheduled tasks.  However, if it DID work, you would fire up Task Scheduler, then click on the Library>Microsoft>Windows>Windows Defender and get to a screen like this:

To set a Task, you double-click on the Scheduled Scan item in the top window, select Triggers, and set a time for your task. This is far from intuitive, but once you set it up, you shouldn't have to worry about it again. Also, if you're only running Windows Defender, you can use these steps to set up a scheduled task to run a scan.

Again, this didn't work with AVG Free, and installing multiple AV programs, even one at a time, scares me. Hopefully, you get the idea, and anti-virus companies will have their programs better coordinated with Windows Defender as the Anniversary Update rolls out.

If you are a 3rd party anti-virus user and want even more protection for your Windows 10 machine setting Windows Defender Periodic scanning on your machine is an easy way to get an extra layer of safety. Limited Periodic Scanning, along with many other new features, will be coming to everyone outside the Windows Insider Program with the Windows 10 Anniversary Update, scheduled to be released in late July.