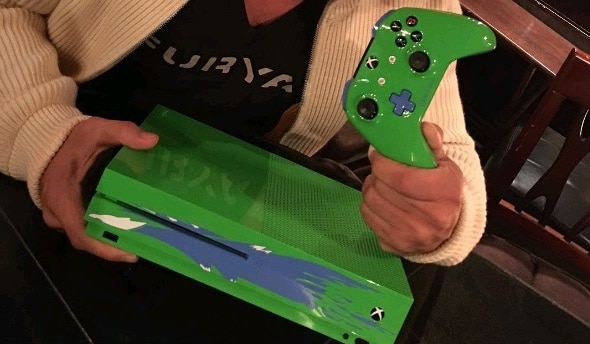 Using the late Paul Walker's charity organization, Reach Out Worldwide (ROWW), Vin Diesel will be giving away a custom Xbox One S (via Reddit) to help Hurricane Harvey, Maria, and Irma victims. Paul Walker died in 2013 in a car accident. The custom Xbox One S console is modeled after the 1995 Mitsubishi Eclipse that Walker drove in the original The Fast and Furious movie in 2001.

Walker's brother Cody is helping ROWW continue its charitable efforts by raising money for the victims of Hurricane Harvey in Texas, Irma in Florida, and Maria in Puerto Rico. Cody is using his late brother's celebrity friends, including Vin Diesel, to host a special Xbox event at the Microsoft Lounge in California. Here is a look at ROWW's recent efforts and a look at more information on Game4Paul, a partnership with Microsoft and Xbox.

Although a lot of people would probably like to see a custom Xbox One X being given away, all proceeds raised from the event will be put towards reconstruction efforts caused by Hurricane Harvey and Irma. Here, Vin Diesel gives you a closer look at the custom Xbox One S. The custom Xbox One S will be autographed by Vin Diesel, Tyrese, and other Fast and Furious stars.

The Xbox One S charity event will start at 11 AM PST on October 1, 2017, at the Microsoft Lounge in Los Angeles, California. Help the victims of Hurricane Harvey and Irma in the 3rd annual Game4Paul event, donate and watch the event live on Facebook, Twitch Xbox channel, and Mixer Xbox channel.

Enpass to bring its desktop app to Windows Store, along with the new Edge Extension