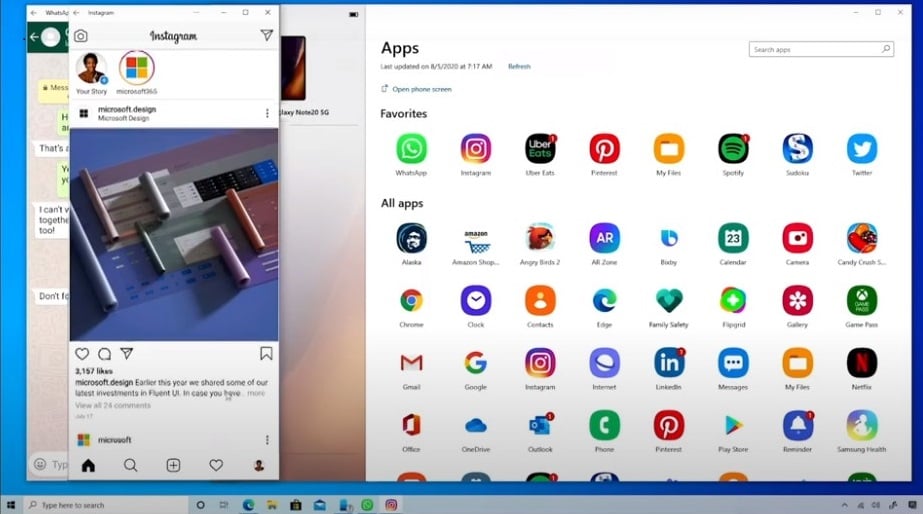 A few weeks ago at Samsung's Galaxy Unpacked event, Microsoft announced Your Phone Apps, a new way to instantly access Android apps in Windows 10. After a brief period of testing with Windows Insiders, the feature is now officially rolling out to the general public.

Just as a reminder, this feature is currently exclusive to a select list of Samsung Phones. If your phone is on the list, you'll be able to use Your Phone Apps to instantly access your Android phone’s mobile apps directly from your Windows 10 PC. You can pin Android apps to the Taskbar or Start Menu to launch an app. You also can open Android apps in windows outside of the Your Phone app for better multitasking.

Asides from having a compatible phone, you will need to have a PC running Windows 10 October 2018 Update or later to enjoy this. The Your Phone app version (1.20071.88) and Link to Windows (2.0) also need to be installed. Additionally, your phone and your PC must be on the same WiFi network for it to work.

Microsoft is rolling out Your Phone apps experience gradually, so not everyone will be seeing it at first. The company also reminds users to submit feedback about the experience. You can learn more about how Your Phone Apps works by checking Microsoft Answers.